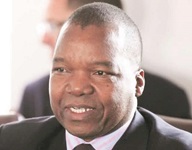 ZIMBABWE – Reserve Bank of Zimbabwe Governor Dr John Mangudya has called on  Zimbabweans to repent from participating in illegal activities that undermine the country’s economic potential.

He said people should embrace patriotism to ensure a quick turnaround of the country’s economic fortunes.

Dr Mangudya said illegal activities that have been negatively affecting Government’s efforts to turnaround the economy also included lack of self-discipline, which has spread to almost all sectors of the economy.

“We have had to do some introspection and came to one broad conclusion, namely that the issue is not that too little money flows into Zimbabwe.

“Rather, it is what individuals and businesses do with that money. Too often, it is spent on unproductive uses, illicit financial flows in the form of trade mispricing, externalisation of export sales proceeds and remittances of unproductive and unsanctioned investments, coupled by porous border posts, tax evasion and smuggling. These leakages are dwindling fiscal space.”

Dr Mangudya said the country could not afford to carry on in that manner.

“It’s not sustainable,” he said. “Something will need to give in. We need to draw a line in the sand and never cross it.

According to RBZ records, $684 million was externalised by individuals for various purposes that included donations, investments and account transfers last year.

The missing link, according to Dr Mangudya, is lack of self-discipline, transparency and accountability.

“It’s lack of confidence,” he said. It’s lack of trust. This economy needs to be transformed through efficient use of resources which requires high levels of transparency and accountability.”

The plugging of leakages approach would need to be supported by other measures that take account of the fundamental shift of the economy to small medium and micro-enterprises (SMMEs).

Government, through the RBZ, is also putting in place a robust National Financial Inclusion Strategy to ensure that everyone has access to banking facilities.

Other measures that directly benefit the people introduced by Dr Mangudya yesterday with immediate effect include reduction of the cost of finance which is expected to make bank loans cheaper and improving the ease of doing business with a view to encouraging investment to help create employment.

Government will, with immediate effect, monitor offshore related companies which have been in the past used as conduits to illegally move funds out of the country.

Dr Mangudya said some corporates have been inflating service fees in order to externalise foreign currency and the central bank will be conducting onsite checks and validation of the operations of such companies.

He said the financial institutions should report all suspicious transactions to the RBZ before they are processed, failure of which would attract huge penalties.

With immediate effect, a notice of not less than 10 days should be given for withdrawals exceeding $10 000, while any offshore investment will now require approval of the RBZ.

To prevent externalisation by related companies through service payments, management, technical and service fees, such payments shall not exceed three percent of the revenue and will also require prior approval of the central bank.

The registration of external service agreements by State owned enterprises will now require a supporting letter from line ministries where the value of the contract is below the State Procurement Board’s minimum thresholds as well as tender approval from the SPB.

Another measure that is likely to draw the involvement of many Zimbabweans in the gold sector relates to the dropping of stringent laws disempowering artisanal miners.

The RBZ is putting in place measures with a view to increasing gold deliveries to Fidelity Printers and Refineries, the country’s sole gold buying agent, from small scale and artisanal miners that have for long been disenfranchised due to the criminalisation of their activities as a result of stringent laws.

The measures include that Fidelity will now buy gold from artisanal miners on a ‘no questions asked basis’ through mobile buying centres to be deployed across the country.

Fidelity will also issue permits to buyers to cover mining areas that have high activity of artisanal miners and in the process gradually develop a database to account for production by artisanal miners.

The central bank introduced a raft of measures to enhance discipline, plug leakages and promote patriotism.

In an endeavour to promote access to banking services by a majority of Zimbabweans, the central bank in the past urged banking institutions to offer basic accounts with minimum maintenance charges.

The RBZ then noted that banks were compensating by charging different types of charges which resulted in the depletion of clients’ savings with banks.

The levying of charges on savings accounts dissuades people from investing their surplus funds in the banking sector.

“In order to promote the use of the banking system and bolster confidence, banking institutions should not levy administrative charges on basic “no frills” savings accounts,” said Dr Mangudya.

“The Bank shall continue to monitor bank charges to ensure that they do not become a barrier to access financial services.”

Dr Mangudya noted that lending rates at some banks remained high and unsustainable when the default interest rates and other supplementary charges were levied.

“Current penalty rates of between 20 to 35 percent are against economic transformation,” he said.

“Against this background, all banking institutions are required to abide by the interest rate guidelines and to ensure that the all-inclusive interest rate for productive lending does not exceed 15 percent per annum in line with the agreed parameters and the interest rate philosophy under Aftrades and Zamco.”