Diamond firms get 90 days to wind up 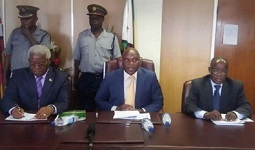 ZIMBABWE – Government has given diamond mining companies in Chiadzwa and Chimanimani 90 days to remove their equipment and other valuables from the mines after it stopped their operations yesterday.

The firms whose mining special grants expired and were not renewed will, however, be expected to hand over all diamond products to Government personnel who have been deployed there.

Representatives of the mining firms attended the Press conference after the decision had been announced to them earlier in the day.

“Since they no longer hold any titles, these companies were notified this morning to cease all mining activities with immediate effect and to vacate the mining areas covered by special grants for diamonds,” said Minister Chidhakwa.

“They have been given 90 days within which to remove their equipment and other valuables. During this period, access into the premises will be by request, which will be considered by the Ministry of Mines and Mining Development.”

He said this was the trend in other diamond producing countries in the region such as Botswana, Namibia and Angola.

He said the consolidated company’s mandate was carrying out exploitation, mining, marketing and value addition programmes for the diamond resource in Zimbabwe.

Minister Chidhakwa said it was therefore important for Government to consult all stakeholders in order to come up with an inclusive and mutually beneficial consolidation process.

“Consultation with the existent diamond companies which took over seven months to allow for extraordinary shareholder general meetings achieved no consensus between Government and the companies on the consolidation issue.

“There was evidence of the desire by the companies to extend the process of negotiation for undeterminable periods at a time when the industry is in decline and definitely in trouble. This was not and remains an unpalatable choice for the Government.

However, the investors in the JV companies, Grandwell and OFECC, respectively made unilateral submissions to the Government opposing the consolidation proposals,” said Minister Chidhakwa.

He said Government had shut its doors for further negotiations with the firms since they did not show interest in consolidation for the past seven months.

Minister Chidhakwa said the consolidated firm was meant to benefit both the companies and Zimbabwe.

“I want to say this is in one way a sad day and in another way a good day. A sad day because we have to part ways in this manner. We extended a hand of friendship to the companies. We said we wanted to work with you in one big happy family.

He said, however, all the companies still refused, in the process leaving Government with no choice but not to renew their licences.

The minister, who was flanked by Home Affairs Minister Ignatius Chombo and MInes permanent secretary in Professor Francis Gudyanga, said it was now incumbent upon the consolidated company to deliver and contribute to the economy.

Government owned 50 percent shareholding in all the companies except Marange Resources it wholly owned.

Minister Chidhakwa said it was therefore inevitable that the companies came up with mechanisms to share their assets and liabilities such as statutory obligations and salaries.

A Chinese national who probably represented Jinan or Anjin Investments queried if Government was not breaching an investment agreement between the Zimbabwean Government and the Chinese government where the two countries were expected to protect investments by their countries.

He added that Government had not invited them to renew their licence.

But Minister Chidhakwa said the agreement did not allow companies investing in either countries todefythe law.

“The agreement does not say players or investors of any of the contracting partners can operate in the two jurisdictions Zimbabwe and China without licences. It actually says that companies operating in Zimbabwe from China and everywhere in the world must comply with Zimbabwean law.

“And part of complying with the Zimbabwean law is securing a licence and making sure that licence is current. If I leave this country today and go to China and I invest in China and I don’t renew my licence, the Chinese government will evict me. If I go to China without a visa, they will get me out before I even get into China.

“We are not expropriating, this is why I said the issue of the assets remember the concession that we are taking does not belong to the companies. The Mines and Minerals Act says the dominion of minerals vests in the State.

“The next paragraph says companies shall secure a limited right to mine the minerals. So the fact that you have been given that limited right does not mean that the concession itself now belongs to you and you can sell it to whoever you want to sell it.

“In fact the Mines and Minerals Act says you cannot seed or sell the concession without recourse to the Government. So we are not touching the equipment. The bulldozers, the excavators everything that you have put up remains your assets,” he said.

An official from DTZ Ozgeo walked out of the meeting during the minister’s presentation.

Minister Chidhakwa said it was not the duty of Government to invite companies to renew their permits but the companies themselves.

He also said they did not expect to face any challenges with the Kimberley Process Certification Scheme adding that they would involve them throughout the setting-up of the consolidated company.

Diamond firms get 90 days to wind up

ZIMBABWE - Government has given diamond mining companies in Chiadzwa and Chimanimani 90 days to remove their equipment and other valuables from the mines after it stopped their operations yesterday. The firms whose mining special grants expired and were no...
Share via
x
More Information