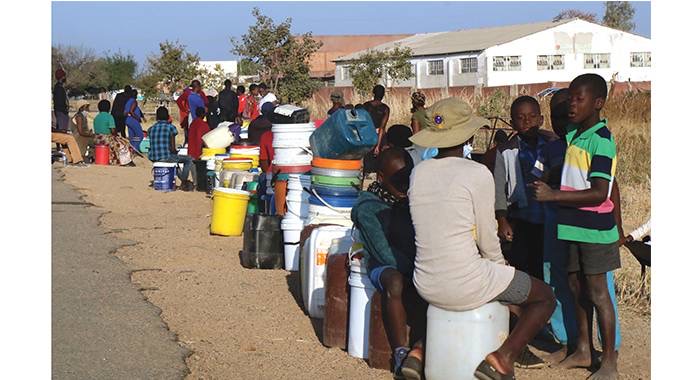 BULAWAYO – Bulawayo has recorded a third diarrhoea outbreak in 11 months with about 50 cases being reported in the high-density suburb of Emganwini. Residents have accused the city council of failing to provide clean water, despite collecting rents and rates.

In June last year, there was a diarrhoea outbreak in the nearby Luveve suburb, which killed 13 people and infecting nearly 2 000. Raw sewerage had contaminated drinking water.

Last year in October about 100 people, mostly children, were treated for running tummies in Mzilikazi and surrounding suburbs. The latest development comes at a time the country is battling Covid-19 which has killed millions worldwide.

At least 25 households in Emganwini have reported severe diarrhoea in Emganwini and residents are flocking to Nketa Clinic and Mpilo Central Hospital for treatment. The affected areas known as ama36 and ama37 had no running tap water when the Chronicle visited yesterday.

“When we were drinking water from bowsers and boreholes, we didn’t have this problem,” said Mr Ngwenya.

Mr Freedom Khanye He said some residents said taps are old and rusty and the council does not check when they report such cases. Mr Ngwenya said the council has to act fast to establish the source of the diarrhoea before it spreads to other areas and gets out of control.

“The council can start by delivering clean water to us, until the water situation improves,” said Mr Ngwenya.

Mrs Nozipho Dlamini He added that the council should close all the valves around the areas while they are still looking for the cause other than leaving people drinking the same water as it may cause more harm. He said the council should consider the treatment bills of the affected people.

“Children are also affected as they are suffering from stomach ailments which is hindering their studies, hence the council should act fast,” said Mr Ngwenya.

Emganwini resident Mr Obadiah Ncube said the water coming from the tap smells and when you boil it, it turns grey.

“It’s been a week since I started vomiting and having a running stomach. I’ve lost so much weight,” said Mr Ncube, who was from Nketa Clinic.

Mr Freedom Khanye said water with a greenish algae-like tinge comes out of taps. Another resident Mrs Princess Silume said this outbreak has affected her and her two children.

“At my house, the diarrhoea started with me, then my five-year-old child. We all experienced serious running stomachs. While we were still trying to comprehend what was happening, my other child was also affected. He has a gruelling experience even now he cannot speak and he’s still sleeping. I bought different kinds of pills from the pharmacy and went to the clinic. I have recovered but my son is still in pain,” said Mrs Silume.

She said her neighbour’s child has been admitted to Mpilo Central Hospital because of diarrhoea. Mrs Nozipho Dlamini another resident said: “Initially I thought it was just a running tummy which would stop on its own but it kept getting worse. I cannot even eat but still I’m running to the toilet three to four times a day.”

Mrs Kudzai Phiri added: “Our young ones are in grave danger. We need help urgently. The council can start by delivering clean water to us, until the water situation improves.”

Mrs Princess Silume Mrs Angeline Muzavazi said the councillor helped residents to get free treatment from Nketa Clinic. Acting Councillor Mzamo Dube of Ward 26 said the problem might be rusty taps and pipes since last year water did not reach the areas. He said council should flush out the green water from taps.

“The council should provide bowsers for some weeks while they are still detecting what the problem is and we’ll fix it,” said Mr Dube.

The Bulawayo City Council corporate communications manager Mrs Nesisa Mpofu responding to the issue said the local authority has dispatched teams to investigate the case. “In the meantime, there will be continuous uninterrupted water supply in the area while teams check the pipes supplying the area,” said Mrs Mpofu.

Bulawayo Progressive Residents’ Association (BPRA) co-ordinator Mr Emmanuel Ndlovu said they have taken samples of water in some of the city’s suburbs for laboratory testing to establish the source of contaminated water consumed by some residents.

BULAWAYO - Bulawayo has recorded a third diarrhoea outbreak in 11 months with about 50 cases being reported in the high-density suburb of Emganwini. Residents have accused the city council of failing to provide clean water, despite collecting rents and rat...
Share via
x
More Information
x