Does Trump’s pledge to lock up Mugabe Trump his racism? 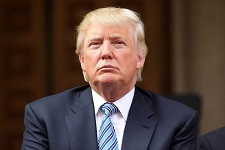 ZIMBABWE – The Republican clown who is shocking the public with his continued strength in the polls despite racist views, Donald Trump, has added more drama for Africans by saying that he would lock up Robert Mugabe and Ugandan President Yoweri Museveni if he became US Prescient.

Besides the arrogance of thinking that the US President has powers to arrest foreign leaders, Donald Trump’s assertion has got Africans talking about the failure of the international community to bring dictators to book.

Sanctions has failed to have any effect on the likes of Mugabe, and geopolitical interests have also seen the advanced countries supporting dictators just to avoid rivals having a foothold in that country.

Whether Trump is to be believed or not, is probably not the issue, but the incredulity of him leading the Republican race and possibly becoming US President, is. Below Andrew Lieberman reports on his pledge for whatever it’s worth.

Washington DC, US business mogul Donald Trump has put Zimbabwean President Robert Mugabe and Ugandan President , on notice, vowing to deal with them ruthlessly when he ascends to Presidency.

Speaking while addressing war veterans in Washington, Trump warned other like minded dictators who want to die in power, that their time is up and its just a matter of time before they face justice.

Mugabe and Museveni must be put on notice that their days are numbered and that I am going to arrest them and lock them in prison. If the past American administrations have failed to stop these two despots, I will personally do it”

Mugabe and Museveni have given the world enough troubles and its about time someone puts to an end all these madness for peace to prevail” said Trump who seemed unapologetic.

Does Trump's pledge to lock up Mugabe Trump his racism?

ZIMBABWE - The Republican clown who is shocking the public with his continued strength in the polls despite racist views, Donald Trump, has added more drama for Africans by saying that he would lock up Robert Mugabe and Ugandan President Yoweri Museveni if...
Share via
x
More Information