‘Down with Mujuru!’ rants a Mugabe general – the last kick of a dying horse! 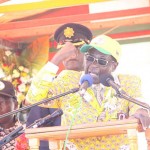 ZIMBABWE – “The commander of Zimbabwe’s Presidential Guard, Brigadier-General Anselem Sanyatwe has threatened to use violent tactics to stop ousted vice-president Joice Mujuru, now People First leader, amid indications the army will be covertly deployed to combat her new movement ahead of the crucial 2018 elections,”.

“This comes amid disclosures the Joint Operations Command – which brings together army, police and intelligence service chiefs – is now actively in operation tailing, monitoring and battling Mujuru and her allies currently on the ground setting up structures and mobilising people in preparation for the launch of their new party before the end of the year and the 2018 showdown.”

(Professionalism is over and many of you are wondering what is happening in the country. I do not want you to hear through the grapevine or read in the newspapers but the animal called Zanu PF shall rule until donkeys have horns. That is why I am saying forward with Zanu PF! Forward with President Robert Mugabe! Down with Joice Mujuru!),” Sanyatwe said.

This is a nightmare the nation could do without, both Mujuru and Tsvangirai have had amble opportunities to deal with this but failed.

Mai Mujuru was been aware of the existence of JOC, the threatening statements by the security chiefs, etc. for the last 34 years and she never once questioned or condemned any of it. Today she is the one on JOC’s “To harass” list and the security personal are trailing her like wild dogs hunting a buck.

Tsvangirai had five years to implement the reforms that would have forced the disbanding of JOC and these things today she is the one threatened and who have landed Zimbabwe’s Presidential Guard, Brigadier-General Anselem Sanyatwe in jail where he belongs for making such outrageous statements. We knew about this nefarious Mugabe and Zanu PF activities before the GNU and the reason why they were listed in the GPA reforms. The idiot failed to get any of these key reforms implemented and today the nation is being threatened by the same dangers again.

Both Mujuru and Tsvangirai have proven beyond doubt to be corrupt and incompetent; how anyone can even consider these idiots suitable to hold any public office let alone the highest office in the land beggars belief!

What hardliners like Sanyatwe are failing to understand is that the greatest threat to Zanu PF’s continued rule is not coming not from Mujuru but the economic meltdown.

The economic situation has resulted in so many companies closing throwing more and more worker on the unemployed mountain now standing at a nauseating 90% plus, ZESA is cutting power 18 hours out of 24 hours, all the cities and towns have days without running clean water, 16% of our people are living in abject poverty, the UN report said 1.3 million are facing starvation this year, etc. The situation is set to get worse as long as Mugabe and Zanu PF remain in office.

Brigadier-General Anselem Sanyatwe this economic situation is NOT socially or politically sustainable, that means it cannot continue for much longer.

It is other the nation will have to accept more and more human suffering or Mugabe and Zanu PF will have to accept regime change. If you think the nation will accept worse and worse economic hardships, human suffering and deaths so that Mugabe and Zanu PF can rule and a select few like yourself can continue to loot and plunder at will then you need to have your head examined.

Unless you can rig economic recovery; Mugabe tried and failed. His $27 billion ZimAsset plan was supposed to create 2.2 million new jobs; the plan is long dead in the water, not even his “all weather” Chinese friends were prepared to bankroll the hare-brain scheme. Try “Pasi neEconomic Meltdown!” Brigadier-General, see if that will fill up Kariba Dam, fill Mugabe’s ZimAsset begging bowl, etc. and we will all live happily ever after!

Ian Smith and his white rebels were stubborn but they realized the game was up, they gave up. The same cannot be said about Mugabe and his thugs; REGIME CHANGE is written on every wall everywhere they look and yet they continue to hang on to this illusion they will rule the country forever. Mugabe and his thugs cannot read and hence will want to hang on to the bitter end; just like other tyrants like Muammar Gaddafi and Saddam Hussein they too failed to read the writing on the wall and wanted to hang on to the bitter end.

The Libya and Iraq dictators and many of their cronies had the bitter end they asked for, no doubt Mugabe and his thugs will have their bitter too. What is worrying here is that by dragging the nation deeper and deeper into economic and political chaos, which is what these tyrant do by hanging on to the bitter end, they make it that much more difficult for the nation to recover.

Gaddafi and Hussein had their brutal end years ago and yet Libya and Iraq have yet to recover. As similar long, protracted and chaotic recover path may now await Zimbabwe because Mugabe not only destroyed everything but, worse still, stayed in power to the bitter end!

'Down with Mujuru!' rants a Mugabe general – the last kick of a dying horse!