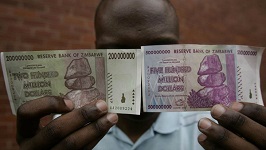 In June, the Reserve Bank of Zimbabwe announced that it would demonitise the local currency which became useless at the height of the country’s unprecedented economic meltdown which ended after dollarisation in 2009.

Demonetisation is the act or process of removing the legal status of a currency unit meaning that the old unit of currency must be retired or decommissioned.

The Deposit Protection Corporation (DPC) announced that it will start paying demonetisation proceeds to qualifying Zimbabwe dollar account holders for banks under liquidation from 1 December 2015 to 30 April 2016.

“DPC shall pay the equivalent US$ amount for each account balance as at 31 December 2008 converted by the UN exchange rate of US$1 to Z$35 Quadrillion,” reads a notice on the DPC website.