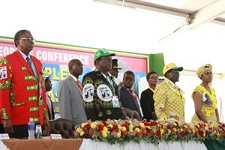 ZIMBABWE – While on the face of it and in public it appeared as if Zanu PF managed to come out of their just-ended annual conference in Victoria Falls without any major dramatic incidences as widely feared, there was widespread panic, paranoia and fear behind the scenes amid some theatrical scenes that were not captured by the media.
Unlike previous Zanu PF conferences, the recent gathering had all the elements of a Hollywood-style thriller — plots, sub-plots, and counter-plots, clandestine manoeuvres, heavy presence of visible and invisible security details, socialisation and drinking along factional lines and even near fist-fights.The party arrived in Victoria Falls broadly divided into two camps — one led by Vice-President Emmerson Mnangagwa and the other by First Lady Grace Mugabe. Pretentions and expectations that President Robert Mugabe would be neutral quickly evaporated when he began to take positions. No matter how hard he tried to be neutral, he eventually came out supporting his wife and her allies.Mugabe and Grace’s allies emerged in one corner, even chanting “pamberi naamai and pamberi neWomen’s League, munhu wese kuna amai (Forward with Grace Mugabe and the Women’s League)”, in their war cries. Mnangagwa’s allies did not chant the slogans.Issues of Mugabe’s “pamberi naamai” was about the Women’s League proposal to have a woman vice-president, to initiate and lay the ground for the removal of Mnangagwa.

However, Mnangagwa and his loyalists, who included the youths, war veterans and several other provinces, came up with a counter-strategy to support the proposal to prop up a female former Zapu leader to join the presidium while replacing the incumbent Vice-President Phelekezela Mphoko.

Women’s League deputy secretary Eunice Sandi Moyo, who is Grace’s ally, was suggested as a potential replacement to Mphoko.

However, Grace and her allies are rejecting the counter saying it smacked of the botched 2004 Tsholotsho Declaration which emerged after a similar proposal was made to propel ousted former vice-president Joice Mujuru into that position.

ZIMBABWE - While on the face of it and in public it appeared as if Zanu PF managed to come out of their just-ended annual conference in Victoria Falls without any major dramatic incidences as widely feared, there was widespread panic, paranoia and fear beh...
Share via
x
More Information
x