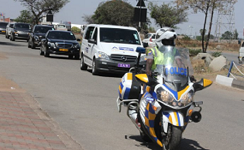 ZIMBABWE – Attempting to give traffic police a US$4 bribe left a Harare man US$30 pooper after he was last week fined by the court over the offence.

Alfred Mutanga, of No.4784 Glen View 3 Harare, was slapped with the fine when he appeared at the Harare magistrates’ court on bribery charges.

Mutanga also risks being jailed for five days if he fails to pay the pay.

Mutanga was taken to court after he attempted to bribe Hillary Tsiga who had stopped the driver of a lorry he was travelling in for having a damaged screen.

Chrispen Chikafu, prosecuting, had it that on December 21 at around 8pm Tsiga along with his colleagues where manning a roadblock at Rumbabvu along Enterprise road.

Tsiga then stopped the lorry which was being driven by Gift Munyaradzi Affandika for having a damaged windscreen.

Mutanga then disembarked from the lorry and went where the police were and offered to buy them some drinks for them to release their lorry.

It was said that Mutanga went on to fetch US$4 from his pocket and attempted to hand it over to the police.

Irked by Mutanga’s actions, the traffic cops then arrested him for bribery.

The 27-year-old was taken to court where he admitted to the offence.

He was slapped with a US$30 fine or spending five days behind bars.

Mujuru popularity skyrockets – thanks to Mugabe