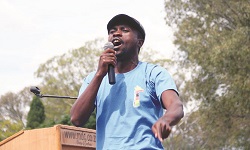 “In the event that you choose to ignore my demand and request, I shall engage all progressive Zimbabweans within a week and protest in various ways against that in a civil, peaceful and resolute manner as provided for within the Constitution,” Patson wrote.

“It defies logic and reason for my brother to disappear without a trace in a nation that is not at war and allow that to go unnoticed and unquestioned.”

Dzamara was allegedly abducted on March 9 this year, making it 168 days since he was taken from a barbershop in Glen View, Harare, by as yet unknown assailants.

“I am, however, concerned and disturbed by the stance assumed by you as the Head of State and by your government,” the petition read.

“In terms of the Constitution of Zimbabwe, which you swore to uphold, defend, obey and respect, you have done little or nothing to observe Section 90 (2) (c) that mandates you to ensure protection of the fundamental human rights and freedoms and the rule of law. To date, you, as the Head of State and your government have done little to assist us as a family to, at least, come to a place of closure.

“In fact, your spokesperson George Charamba indicated that the issue of our missing family member is too small to bother you, a sentiment we felt was irresponsible, insensitive and unfortunate.”

The petition added: “Although Itai Dzamara openly opposed your government and some of its policies, his security and right to life remains a direct and unquestionable responsibility of your government.”

Patson said there had been suspicion of the involvement of State security agents in his brother’s abduction and that position has not changed.

“As you might be aware, Sir, Itai Dzamara petitioned you to step down for failing to run the country well, according to him, and since that day, he had been receiving threats on his life from security agents and he was subjected to serious torture at the hands of the ZRP (Zimbabwe Republic Police) and other private sources within your Zanu PF political party,” the petition read.

Patson said government and relevant ministries should take the responsibility to engage the Dzamara family and the nation on the matter the same way it engaged whoever was concerned when Cecil the lion was killed.

Mugabe, who today will present the State of the Nation Address, is not expected to speak on the Dzamara issue that has dented the country’s image in the eyes of the international community.

Foreign embassies have been at the forefront of demanding Dzamara’s release, an issue that has left the Zimbabwean government red-faced.