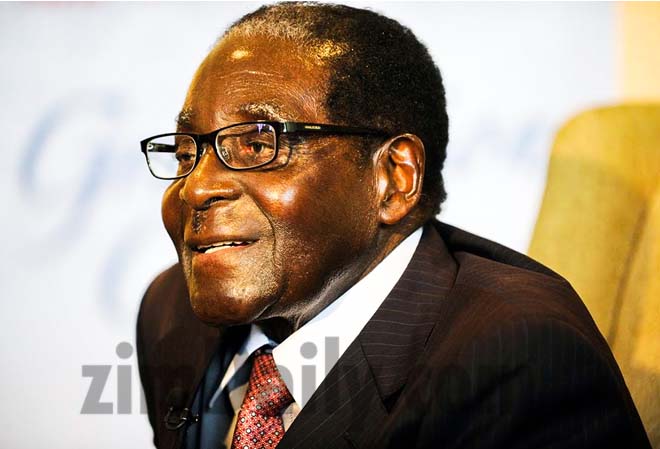 ZIMBABWE – President Mugabe says the country’s economy is ready for take-off, with various mechanisms put in place to ensure the successful implementation of Zim-Asset.

Delivering his State of the Nation Address to a joint sitting of the National Assembly and Senate in Harare today, the President said Government had adopted a 10-point plan that cuts across all economic enablers.

The speech predominantly focused on the economy that he said recorded modest growth as a result of the negative impact of drought on the agricultural sector given that Zimbabwe is an agro-based economy. “Zimbabwe is already positioning itself for major economic take-off in keeping with Zim-Asset, which requires massive capital injection and rapid implementation,” President Mugabe said.

“This has seen Government signing key projects with China covering energy, roads, railways and telecommunication, water, agriculture, mining and tourism.”He said to maintain economic growth and create employment, Government had drawn a 10-point plan to revitalise agriculture and the agro-processing value chain, advance beneficiation and value addition to agricultural and mining resource endowments, among other facets.

Government, he said, was pursuing both domestic and external alternative financing for key Zim-Asset programmes such as infrastructural development. “Let me reiterate that Government recognises the importance of strengthening re-engagement with the international community.

“Indeed, current re-engagement efforts with both bilateral and multilateral partners, including the African Development Bank, the Afro-Asian Bank and the World Bank under various initiatives, should see improvement of relations and the opening up of new financing avenues, for long overdue reforms and development cooperation. “In order to buttress the positive economic gains recorded to date, Government will implement policies that will improve the business environment and promote and attract both domestic and foreign investment. In this regard, it is our expectation that once the National Diaspora Policy is finalised, it should spur our people in the Diaspora to take advantage of the many investment opportunities existing in the economy,” President Mugabe said.

The President said in line with the Rapid Results Approach Framework, Government endeavours to overhaul the Companies Act and other legislation that hinder the ease of doing business in Zimbabwe. Instead, he said, Government would push for “robust legislative and regulatory framework” to establish a One Stop Investment Centre that streamlined processes and procedures.

“This is now a very urgent and high priority matter for which those responsible will be held to account. “Government acknowledges that unsound procurement practices are slowing down economic growth in the country. In view of this, a new Procurement Bill will be drafted and tabled in Parliament before the end of 2015. The Bill incorporates Comesa procurement guidelines which emphasise devolution of power to award tenders to procuring entities. “The procuring entities would comprise Government Ministries, parastatals, state enterprises and local authorities,” he said.

President Mugabe added that the SPB would be transformed into a new non-executive procurement authority tasked with setting standards and guidelines as monitoring compliance by procurement entities. The board would also act as advisor to the Government on public procurement policy.

“In each case, specialised audits are to be undertaken and various reform and turn-around options identified. Underlining the importance we accord agriculture, the parastatals reform programme is beginning with the Grain Marketing Board and the Cold Storage Company.

“In the interim, however, and as an important parallel process, Government has also turned the spotlight on Corporate Governance throughout the Public Sector, including across all parastatals and State enterprises and local authorities.

“It is very clear that, over many years, and due to a variety of reasons, the level of compliance with good corporate governance principles at many, if not most, of our parastatals or State enterprises, has fallen to levels well below what might be regarded as even ‘minimally acceptable’,” said President Mugabe.

The President said huge salaries and other benefits that boards and managements at parastatals and State enterprises awarded themselves exposed their greed at the expense of delivery. Mugabe said following the Supreme Court ruling last month that saw thousands of workers fired, Government immediately reviewed the Labour Act to protect workers by doing away with common law. He said the amendments were meant to guarantee a win-win situation.

President Mugabe said overall economic performance had slowed down in agriculture, mining, tourism, construction and telecommunications. “The economic growth rate, which was initially projected at 3.2 percent, is now expected to register 1.5 percent growth in 2015, this being occasioned primarily by the negative impact of drought in our agricultural sector.

“In 2014/2015 season, crop production was negatively affected by a combination of the late onset of rains and its uneven distribution, both consequences of climate change. Consequently, the agricultural sector performance will be below expectation,” he said.

The President who remained calm despite botched attempts by the opposition MPs to hackle during his speech, hailed Zimbabweans for maintaining peace and stability, itself a key enabler to economic development. He implored Zimbabweans to continue safeguarding the prevailing peace and promote the unity and spirit of hard work, a virtue that citizens of this country are known for.

Meanwhile, Speaker of the National Assembly, Advocate Jacob Mudenda said he would liaise with the President’s Office to organise that he makes time to attend Parliament where MPs will be able to ask him questions. He was responding to MDC-T legislator for Kuwadzana, Mr Nelson Chamisa who requested that President Mugabe allow them to ask questions particularly on issues that he raised during his State of the Nation address.

ZIMBABWE - President Mugabe says the country’s economy is ready for take-off, with various mechanisms put in place to ensure the successful implementation of Zim-Asset. Delivering his State of the Nation Address to a joint sitting of the National Assembl...
Share via
x
More Information
x