ED goes beyond Mugabe in his love for Power:Madhuku 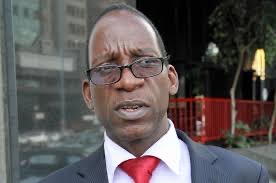 Addressing journalists in Harare, Madhuku said his party was opposed to the Constitutional Amendment No. 2 recently enacted into law and feels vindicated after he massively campaigned against the new charter in 2013.

“We notice a very dangerous trait in Amendment Number 2. It’s a level above what we used to have. We have been in this game to say that we need a people driven constitution. At one point we were dealing with President Mugabe and some people thought it was all about Mugabe but what has happened with Amendment 2 is that the current President has gone much beyond what President Mugabe was doing in terms of loving power as a person and concentrating it.

“I think it shows the trend that came out in a video where the President came out saying 2030 ndendichipo (I will be around). This is what amendment No. 2 is all about and we are condemning it. We are noticing that is what is actually happening. It’s a dangerous trait and we have to call upon Zimbabweans to be alive to that process because there is no other way why the President would ignore every other advice that would have happened,” said Madhuku.

He said the removal of the running mate clause and the powers vested in the appointment and extension of term of office for judges consolidated power in the President.

“As NCA, the content in the Amendment is extremely dangerous for the country, it is a continuation of what is already in the Constitution which is where power is consolidated in the President but what is even more dangerous in respect of Amendment Number 2 is that it personalizes that consolidation.

“It is very clear that power is now being concentrated not in the hands of an office but of an individual who is in office and that is a very dangerous approach and you get it more pronounced in amendment No. 2.It is all about the personal love for power by President ED Mnangagwa and this is what is being reflected in amendment No. 2,” he said.

ED goes beyond Mugabe in his love for Power:Madhuku