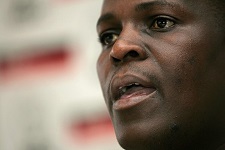 ZIMBABWE – The ugly and chaotic scenes which marred the burial of the Member of Parliament for Nkulumane constituency in Bulawayo, Thamsanqa Mahlangu, at the weekend exposed deep seated differences within the beleaguered opposition MDC-T party and laid bare its leader Morgan Tsvangirai’s frailties and weaknesses.

Despite having flown to Bulawayo on Thursday specifically for the burial, the embattled Tsvangirai remained holed up in a house belonging to one of his party’s functionaries and failed to attend a single service to honour one of the MDC-T’s founders. Mahlangu belonged to a faction bitterly opposed to MDC-T vice president Thokozani Khupe and his disdain for her was public knowledge.

However, reports at the weekend suggested that Khupe’s group was intent on hijacking the funeral for political expediency but their plan came unstuck when Nelson Chamisa and youths aligned to him camped at Mahlangu’s stepfather’s house in Nkulumane and maintained a vigil that lasted until the former youth assembly leader was buried at Lady Stanley cemetery.

It is sad that the MDC-T’s factional politics were allowed to play out at a sombre gathering such as a funeral which was literally hijacked by self-serving politicians. We commiserate with the Mahlangu, Sango and Mugova families who despite having differences of their own regarding the burial plans for Thamsanqa, had to watch the sad spectacle unfold before their own eyes.

Their son must surely be turning in his grave because even he could not fathom the farcical charade that became his final moments on earth. Reports of youths carrying the MP’s coffin to the Roman Catholic church in Nkulumane on foot and the hearse taking off at high speed from Luveve as the factions fought for control of the body made sad reading.

Tensions were palpably high throughout the entire proceedings from Friday night into Saturday and we shudder at the thought of what could have happened had the rival factions come into contact. While all this drama was unfolding, Tsvangirai maintained a safe distance, allegedly at the advice of the Khupe group.

The official explanation from party spokesman Obert Gutu was that the party leadership took a step back to allow the family to resolve its differences which however spilled into the graveyard.

“As a political party,” Gutu said in a statement, “we took a firm position not to take sides with any of the three separate family units that were squabbling over how the funeral of our late hero was supposed to be handled.

“The situation on the ground made it virtually impossible for president Morgan Tsvangirai and members of the national standing committee to attend the burial of our late hero at Lady Stanley cemetery.”

Of course, Gutu’s attempt at damage control is fraught with holes because Tsvangirai and his lieutenants could have visited all the three funeral wakes or showed up at the cemetery for burial. In fact, former Speaker of Parliament and national chairman Lovemore Moyo all but confirmed the chasm in the party with a leaked internal memo lamenting his sadness at the latest turn of events. “Am deeply concerned, disappointed and shamed, to say the least, about the sad events at Hon Mahlangu’s funeral. Ranging from the party’s active factional involvement in family affairs to failure by the NSC (national standing committee) members to pay their last respects to our hero.

“Cdes, now is the time to pause for a while and ask ourselves as leadership of this movement tough questions about the sincerity and commitment of this struggle. We need to check whether the party is still on the right direction or it has been hijacked by power mongers? Whose interests did we serve yesterday through our actions by not attending Thamu’s burial? Personally, I dissociate myself with the leadership’s actions and decisions that I have no doubt were masterminded and authored by people who hated Hon Thamu. We were misled and acted wrongly. Nduna deserved to be respected by all of us for his service to the party and the struggle. He never sold out. Unfortunately we betrayed Nduna and sold him out to his enemies whom we know very well,” said Moyo.

We hold no brief for Tsvangirai but the Mahlangu burial fiasco could have diminished his standing among party stalwarts in Bulawayo and raised the profile of Chamisa who is reported to be pining for leadership of the MDC-T.

The youthful former national organising secretary might have grudgingly accepted his humiliation at the last MDC-T congress where Tsvangirai is alleged to have engineered his defeat to current secretary general Douglas Mwonzora but the Kuwadzana East legislator could have the last laugh. His stock is certainly rising among the rank and file of the party.

So Tsvangirai beware, the Cobra might strike at any moment now.

Mugabe will be more comical than Mukadoda and Paraffin

ZIMBABWE - The ugly and chaotic scenes which marred the burial of the Member of Parliament for Nkulumane constituency in Bulawayo, Thamsanqa Mahlangu, at the weekend exposed deep seated differences within the beleaguered opposition MDC-T party and laid bar...
Share via
x
More Information
x