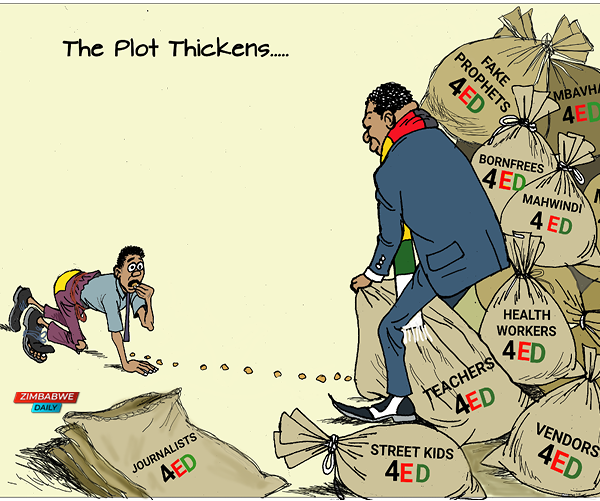 President Mnangagwa’s government has all but thrown caution to the wind. Nothing matters anymore except anything and everything perceived to bring votes to keep him in office.

The latest move to coerce teachers to go and attend his rally in Harare under the guise Teachers for ED puts the final nail to the coffin.

We all know civil servants ought to be apolitical but when you have them join a parallel politically inclined structure and come out in the open, it means you have chewed up the constitution and thrown all threw out all Public Service regulations through the window. Mr President.

Can the converse obtain Mr President, we ask? Would teachers and other civil servants whose hearts goes out for your rival Nelson Chamisa of CCC openly attend your nemesis’s political rally and live to see the day? It seems this hypocrisy is becoming the order of the day

Why sink so low, to the extend you compartmentalize the nation, worse still your party.

You have clearly and repeatedly warned the church to stay away from politics even though such notion is misplaced, but here you are, making forays into the church, setting up these pseudo structures “Pastors for ED” are you not meddling Mr President?

Who shall whisper to you given that your are the president, you represent everyone including those that didn’t vote for you? Why minimize yourself to this level?

Your party cadres are committing political violence in broad daylight using vehicles branded your party and recently Owen Mudha former Minister warned of bloodshed in the 2023 elections, that doesn’t move you an inch.

The rate at which robberies are occurring in our Zimbabwe is unprecedented. As is that is not enough, some members of the security forces both retired and even those in active duty have been nabbed or fingered in such lawlessness and for you life goes on.

Shoddy deals by ministers and in some instance with your children and close relatives occur, still no word nor action from you. Once the fish starts to rot from the head, it becomes a disaster because the body will then rot even faster.

You recently received a state of the art Helicopter Ambulance and within the same period an accident occurred in the mountainous Nyanga and this air machine would have saved lives if only we could do away with “cheff and povo” mentality.

You preach a lot of magnanimity, yet reality on the ground you exhibit a mean uncaring selfish unpatriotic attitude towards your fellow countrymen as they suffer and irk out a living in their God given But very rich country.

You need to be reminded that you are still mortal and only God is sovereign and everlasting. You preach a lot about anti-corruption yet cases without number have come to the fore and all you do is  turn a blind eye. COTCO is a case in point.

Communal farmers who brave the sweltering heat of Gowke and other places suffer the misfortune of being told that part of the payment of their cotton proceeds will be in the form of groceries, some RTGS and a little amount in US$, what mockery, yet an MP, chairman of a Parliamentary portfolio committee of this sector is caught by ZACC with hands in this same jar.

Nothing moves your conscience anymore Mr President. Cronyism. God says you “These things you have done I kept silent; you thought I was altogether like you. But I will rebuke you and accuse you to your face” Ps 50:21

Your administration denies people justice, remands without end for frivolous reasons. If you had not been jailed by Smith’s regime at some point, one would excuse you but you were once incarcerated for your freedom of rights and conscience, why you repeat exactly the same if not worse than Smith boggles the mind.

President Mnangagwa’s government has all but thrown caution to the wind. Nothing matters anymore except anything and everything perceived to bring votes to keep him in office. The latest move to coerce teachers to go and attend his rally in Harare under ...
Share via
x
More Information