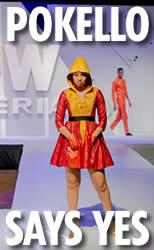 Elikem, who is in the country for a five-day stay, said lobola in Zimbabwe is expensive.

“I have heard that the bride price is expensive in Zimbabwe compared to Ghana although it’s not for free but cheap in my country. So far, I am saving money for lobola and plans are now at an advanced stage. I will let you know the dates when the time comes,” he said.

The 24-year-old ex-housemate said Zimbabwe is full of loving people.

“I am enjoying every minute. I have been to Bulawayo and the people are just friendly like Hararians. It’s like I am at home,” he said.

Elikem said he entered the house with no strategy but it was love at first sight with Pokello (28).

“When I was in the house, I befriended Pokello and we began to fall in love. Our love is still the same. She is beautiful, smart and confident,” he said.

He said Pokello is a “dadaba” (Ghana word) for spoiled child.

“I call her dadaba, meaning a spoiled child because she loves to be pampered a lot,” he said.

“I’ve been to Garwe Restaurant courtesy of Pokello and Herbert Huruva and his team. We ate kapenta, brown sadza (rezviyo) and madora. I loved it. Zimbabwe is rich like she used to say in the BBA house,” he said.

Pokello said she was happy that Elikem was in the country as promised.

“I love him so much and we are happy together. I already met his mother and brother, can’t wait to meet his sister in Ghana,” she said.

The couple said it was deciding on relocation.

“We are planning to work together on some endorsements and launching our label ‘Polikem’ for clothing line. I need to work on my business. I am waiting for him to pay lobola so that we decide on relocation but don’t worry, I will let you know sooner,” she said.

Elikem’s elder brother Troy, said they have already met some of Pokello’s family members apart from her dad.

“We are still to meet Pokello’s dad. He was tied up but other family members, we have met them and they are good people,” he said.

Elikem, who could be heard saying (Ndeipi) Shona slang for how are you? was clad in camouflage shorts with matching shoes and cap during the Summer Jamboree held at the Kebab Restaurant in Newlands, Harare. Pokello and Elikem had a photo-shoot and autograph signing at the restaurant yesterday.

The duo also stole the show when they danced to popular Azonto song from Nigeria, which drove their fans wild. They are set to tour the Heroes Acre today before they leave for Ghana tomorrow

Big Brother Africa-The Chase finalist, Elikem Kumordzie's plans to marry Pokello Nare are at an advanced stage. Elikem, who is in the country for a five-day stay, said lobola in Zimbabwe is expensive. 'I have heard that the bride price is expensive in Zi...
Share via
x
More Information