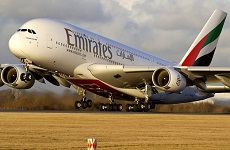 ZIMBABWE – Emirates has increased capacity on its Zambia and Zimbabwe flight with the deployment of a larger Boeing 777-300ER aircraft.

First deployed on the route on 1 February 2016, the new aircraft replaced the smaller Airbus A340-300, offering an additional 97 Economy Class seats per flight. The aircraft has eight private suites in First Class, 42 lie-flat seats in Business Class and 310 spacious seats in Economy Class.

“The up-gauge to the Boeing 777-300ER on the Lusaka-Harare route is part of commitment to offer Zambian and Zimbabwean travellers even more comfort and entertainment on our daily service,” Emirates Senior Vice President for the area Orhan Abbas says.

“In addition to the enhanced on-board product, we are also able to offer more seats, ensuring capacity to meet growing demand on the route, not just outbound from Zimbabwe and Zambia, but also inbound from the United States, UK and Australia, as we build and strengthen trade and tourism links between Zimbabwe and Zambia with markets in the rest of Emirates’ extensive global network,” he added.

Popular destinations for both Zambian and Zimbabwean travellers include Dubai, London, Beijing, New York, Hong Kong, Manchester and Delhi, amongst others.

The deployment of the bigger aircraft on the Lusaka and Harare route also makes Emirates’ southern Africa network an all Boeing 777 operation, with flights to Durban, Cape Town and Johannesburg in South Africa, and Luanda in Angola.

The aircraft’s larger belly-hold to carry cargo offers 23 tonnes of capacity per flight to support the two countries’ exports such as vegetables and flowers, and imports ranging from pharmaceuticals to mining equipment.

ZIMBABWE - Emirates has increased capacity on its Zambia and Zimbabwe flight with the deployment of a larger Boeing 777-300ER aircraft.  First deployed on the route on 1 February 2016, the new aircraft replaced the smaller Airbus A340-300, offering an ad...
Share via
x
More Information