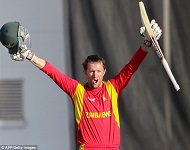 ZIMBABWE – An unbeaten century from Craig Ervine guided Zimbabwe to a series win over Ireland in the second one-day international at the Harare Sports Club. Ervine batted for more than 40 overs in stifling heat to set up Zimbabwe’s five-wicket win with an over and a half to spare. He shared in a 98-run third wicket partnership with Sean Williams that laid the platform for Zimbabwe, after which Tino Mutombodzi helped to keep things ticking over and Sikandar Raza’s 29-ball 33 took the game away from Ireland. All the while, Ervine continued to pick gaps and the odd boundary, bringing up his ton and the end of the match with his ninth four.
John Bracewell, the Ireland coach, has said that his side needs more fixtures against quality opposition to keep improving. Ireland ran Zimbabwe close in the first two games of their ongoing ODI series but lost both in the penultimate over.

“At the moment Zimbabwe have shown greater composure at the pressure points and that counts for a lot,” Bracewell said. “They have been playing a lot of tough cricket for a period of time, and that really helps you deal with pressure points. You have just come out of a series against Pakistan, you had a competitive series against New Zealand. You are getting used to competing because you are playing a lot more cricket.

“We have recognized that as a country, we need to have more fixtures, exactly like how you guys are doing – having series, being competitive, playing day in and day out, and on surfaces that are going to test you.

“We have been an event-based country. We fire up for World Cups and that is pretty much all we get. We get fragments of games in between that. We now need to play basically around the clock like all the international teams. The gap will narrow on teams the more cricket we get.”

As the match neared its conclusion, the result seemed a foregone conclusion and the question was whether or not Ervine could reach his ton within the limited runs remaining. The jovial, celebratory atmosphere in the ground was a far cry from the pressure cooker Ervine had entered into when Zimbabwe lost both of their openers within the first nine overs of their chase.

Chamu Chibhabha and Richmond Mutumbami had approached their task with attacking intent, but when they fell in consecutive overs the Ireland attack had their tails up and a clear opening with Zimbabwe at 51 for 2 in the ninth over. The response from the left-handed pair of Ervine and Sean Williams was to go on the counterattack, and Ervine motored into the 20s with a flurry of boundaries, the pick of which was a shimmy-and-swipe off George Dockrell that flew high over long off.

Williams, meanwhile, used the sweep to particularly good effect and brought up the fifty partnership with a one-kneed swat to the long-leg boundary. He continued to be proactive against spin, but eventually perished playing one shot too many when he lifted offspinner Andrew McBrine straight to Ed Joyce at long on. Zimbabwe were 149 for 3 then, and Ireland might have surged once more but Mutombodzi, elevated up the order, picked up where Williams left off to keep Zimbabwe ticking over.

At the other end, Ervine was in cruise control, setting himself to bat right through the innings and anchor Zimbabwe’s chase. An inspired piece of fielding from George Dockrell in the covers eventually got rid of Mutombodzi in the 37th over, and had Niall O’Brien been able to hold a thick edge off Ervine’s bat in the next over, standing up to the stumps to John Mooney, Ireland might have been able to wrest back control of the match.

Just as the pressure threatened to build once more, Ervine found a brace of boundaries on the leg side off Tim Murtagh and then moved into the 90s with a clean six down the ground followed by a controlled sweep for one off Paul Stirling’s offspin. When Raza kicked his own batting into overdrive, it seemed Ervine might not reach his hundred, but he departed with 13 still needed and Elton Chigumbura left it to Ervine to take Zimbabwe home – and reach his second ODI hundred in a successful chase – with his eighth and ninth fours off John Mooney.

His efforts bettered an industrious day with the bat for Ireland. They had been put in to bat by Zimbabwe in the morning, but responded in bellicose fashion. Paul Stirling weathered the early loss of his captain and opening partner in his own inimitable style, rushing into the 70s at close to a run a ball before he was trapped lbw by Raza.

Niall O’Brien continued the fight with a half-century that included three huge sixes, and Gary Wilson ensured their good work was not undone as he marshaled Ireland’s charge at the death. Zimbabwe picked up regular wickets, but Wilson found even more regular boundaries as Ireland reached an imposing 268 for 7. But after an early wobble in their chase, Zimbabwe managed to stay ahead of the asking rate for most of the afternoon thanks to Ervine and a vocal home crowd cheered their moral-boosting victory.

ZIMBABWE - An unbeaten century from Craig Ervine guided Zimbabwe to a series win over Ireland in the second one-day international at the Harare Sports Club. Ervine batted for more than 40 overs in stifling heat to set up Zimbabwe's five-wicket win with an...
Share via
x
More Information
x