Government has since declared 2016 a drought year after the country received below normal rain fall beginning October last year.

The Zimbabwe Vulnerability Assessment Committee says an estimated 1.5 million rural locals will be food insecure in the first three months of this year.

The figure is likely to increase if the El Niño weather phenomenon, as predicted, causes continued drought and a poor April – June 2016 harvest.

There have been reports of people resorting to eating wild fruits as the dire food situation increasingly gets dire.

EU ambassador to Zimbabwe Phillipe van Damme told reporters in Harare Thursday that Brussels was concerned by government’s reluctance to declare a state in order to attract assistance from the donor community.

“What I am saying to the government is that there is huge competition world-wide for emergency aid and, unfortunately, we have all kinds of crises in the world and all the humanitarian aid organisations have been stretched,” he said.

“ … that is why we think it may be important to declare a state of emergency because which is signal to the international community that, indeed, that we have difficulties in coping with this crisis.”

The EU envoy said Brussels was in the process of lobbying the international community to intervene in Zimbabwe’s drought situation.

“I have not had the opportunity yet to announce to the government, but I have just the confirmation that yes we will probably get another $4.5 million for Zimbabwe to start the close-monitoring of the challenges and the quantification of the matrix to the quick assessment being organised by Zimbabwe Vulnerability Assessment Committee (ZimVAC).

“(The assessment) we will help ensure we have more precise figures which will allow, not only the EU and its member states, but also other international partners to go back to their capitals and find out what additional support can be mobilised,” said Ambassador Van Damme. 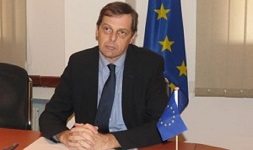