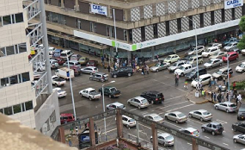 ZIMBABWE – The European Union has once again renewed for another year its sanctions on President Mugabe and First Lady Amai Grace Mugabe, a move analysts said indicated that Zimbabwe and the bloc were going in circles on re-engagement.

A notice on the EU’s official journal yesterday showed that the illegal sanctions would be maintained until February 20, 2017 and the decision was arrived at after “taking into account political developments in Zimbabwe”.

The restrictive measures will continue to apply to President Mugabe and Amai Mugabe and one entity, the Zimbabwe Defence Industries.

“We don’t think the sanctions are warranted, legal and justified,” he said.

“As such, we will not change our position and this is the stance we will continue to take — the sanctions should be removed in totality. You can remove all the people from the sanctions list but as long as they remain on the face of the country, President Mugabe, it does not make sense to us and that we don’t tolerate.”

The EU imposed illegal sanctions on Zimbabwe in 2002 at the behest of Britain after the country embarked on the land reform exercise.

Britain had reneged on its commitment to fund land redistribution from the white minority to the landless black majority.

Britain has lately come under pressure from other EU countries to end the diplomatic war with Zimbabwe because most of them want to normalise trade relations with the mineral-rich southern African country.

European countries such as France and Denmark have started warming up to Zimbabwe’s vast investment opportunities and have invested in a number of sectors.

“These sanctions are illegal and never went through the United Nations Security Council so we cannot spend our time discussing illegality,” he said.

“We have told them our position that these sanctions should be removed in their entirety and unconditionally. They are not doing anyone any favours and we are a country that abides by laws and we do not entertain rogue elements who do not follow rules, including those of the UN.”

The illegal embargo is believed to have cost the country nearly $42 billion.

Pursued with a parallel programme of “regime change”, and supported by the United States of America, the sanctions have failed to dislodge President Mugabe and his Zanu-PF party.

Zimbabwe: Backs to the wall, waiting

Mugabe gives his first State of the Nation Address since 2007