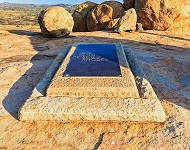 ZIMBABWE – And, every few years, the call is rejected and Rhodes left undisturbed. In truth, nowhere has a more informed and reasoned debate about Rhodes and his works than the country which he subjugated and which has since made anti-colonialism its official credo. Instead of shrill controversy in Oxford, President Robert Mugabe and most Zimbabweans offer informed and measured reflection.

After all, Rhodes is not a figure from the past in Zimbabwe. For the students of Oriel, he is whipped into life by a hashtag and a frenzied social media campaign; for the people of Zimbabwe, he is still among them.

Rhodes is mentioned almost daily in the official media and by Mr Mugabe in speech after speech. During the last two decades, the country’s politics have been dominated by the brutal and often disastrous business of reversing his chief legacy, namely the possession of swathes of fertile land by a tiny white minority.

The fact that Rhodes is still part of life helps to explain a profound reluctance to erase his memory and cast aside his bones. The last time that a call was made for the grave in the Matopos to be exhumed, Middleton Nyoni, then Town Clerk of Bulawayo, offered a telling response. “It is the Taliban who destroy history – and I am not a Taliban,” he declared. “After Rhodes’s grave, who is next?”

As it happens, the late Mr Nyoni spent his youth fighting a guerrilla war against the white-ruled state that Rhodes had established. Today’s student activists should be humble enough to heed an opinion that, unlike theirs, came with experience and moral authority.

They should also listen to Mr Mugabe. In April, he gave a wry response to the successful campaign to remove a statue of Rhodes from the University of Cape Town. “You may have the statue because that’s where he began,” said Mr Mugabe, addressing South Africans (although he might as well have been referring to Oriel, Rhodes’s alma mata). “We have him down below the Matopos as that’s where he wanted to die.”

ZIMBABWE - And, every few years, the call is rejected and Rhodes left undisturbed. In truth, nowhere has a more informed and reasoned debate about Rhodes and his works than the country which he subjugated and which has since made anti-colonialism its offic...
Share via
x
More Information