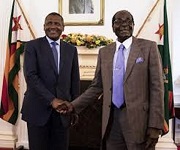 ZIMBABWE – Africa’s richest man Aliko Dangote has curiously omitted Zimbabwe from the countries he named as investment destinations only a few weeks after purportedly striking a mega deal with the southern African country.

During his visit to Zimbabwe last month, where he met President Robert Mugabe, the two vice presidents Emmerson Mnangagwa and Phelekezela Mphoko and a host of Cabinet officials, the country was made to believe that Dangote plans to construct a $400 million cement plant.

However, Dangote was later quoted by international news agency Reuters, stating his plans to launch several new cement and sugar plants as well as mines across the continent.

He said his company planned to build cement plants in Cameroon, Ethiopia, Kenya, Mali, Niger, Nigeria, Senegal, Ivory Coast and Zambia and conspicuously left out Zimbabwe where people were made to believe that he wants to construct a cement plant with a capacity to produce 1,5 million metric tonnes annually.

“Another plant will be launched in the Democratic Republic of Congo next year,” he said.

As a second step, Dangote, whose conglomerate also has oil, gas, telecommunications and real estate interests, will expand its sugar
business by launching production in Zambia where he already has a cement plant. Zambia would be an ideal regional hub as it has borders with eight countries.

People privy to the goings-on in government said it was not surprising that Dangote did not mention Zimbabwe in his future cement plant investment as the Nigerian business mogul was only interested in the country’s minerals.

“The real reason for Dangote’s visit to Zimbabwe was to scout for mining concessions after he had extended a loan to government,” said the source.

“The cement plant mantra was just a side-show to the real thing. Zimbabwe has more than three huge cement manufacturers that are producing more than enough for the country, so it doesn’t make sense for Dangote to construct another mega cement plant here,” the source added.

Zimbabwe’s cement companies — Lafarge, PPC and Sino Zim — have an annual production capacity of 2,1 million metric tonnes with most of the cement being exported due to depressed construction activities in the country.

ZIMBABWE - Africa's richest man Aliko Dangote has curiously omitted Zimbabwe from the countries he named as investment destinations only a few weeks after purportedly striking a mega deal with the southern African country. During his visit to Zimbabwe ...
Share via
x
More Information
x