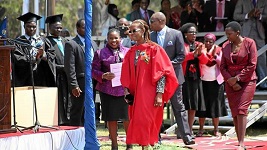 ZIMBABWE – HARARE – Education-hungry and title-seeking Zimbabweans have been warned against acquiring educational qualifications from dubious local and international institutions as they will not be recognised in the country.

The Zimbabwe Council for Higher Education (Zimche) yesterday said that citizens who wanted to further their studies must also stay away from online higher learning institutions as they will be wasting their money.

Zimche chief executive officer Emmanuel Ngara told journalists at a press conference in Harare yesterday that only registered institutions would be recognised.

“External institutions must be registered with their councils or commissions for higher learning in their countries of origin in order for Zimche to recognise the qualifications.

“Local degree-granting institutions must be registered with Zimche if the qualifications they award are to be recognised in the country,” Ngara said.

This comes as the body is involved in a legal battle with an unregistered institution, International Institute of Philanthropy (IIP), which has been offering high-profile Zimbabweans with “fake” honorary degrees.

Top government, police and army officials, as well as business people have also been left with egg on their faces after receiving degrees from unrecognised institutions.

“There is an institute that is giving out doctorates and the matter is still at the Prosecutor-General’s (PG) office.

“We hope the PG will be able to help us in this matter.

“In recent times, many of our citizens in the country and in the Diaspora have gone on to obtain qualifications from various institutions worldwide.

“Some of the institutions have unfortunately turned out to be degree mills, that is, those institutions who only exist in name but with no physical address and from which one can buy a degree.

“Honorary degrees that are awarded by institutions that are not universities are also not recognised by Zimche,” Ngara said.

“There is a huge difference between online degree programmes and distance education programmes, and we would like to warn citizens not to be hoodwinked by institutions of such questionable credibility.

“The practice of forging certificates has the potential to damage the reputation of our good education system and good standing of Zimbabwe as a nation that provides high quality education in the region and beyond.

“This practice needs to be eradicated with immediate effect,” said Ngara.

ZIMBABWE - HARARE – Education-hungry and title-seeking Zimbabweans have been warned against acquiring educational qualifications from dubious local and international institutions as they will not be recognised in the country. The Zimbabwe Council for Hig...
Share via
x
More Information