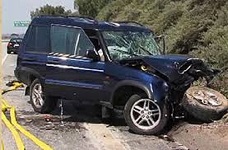 ZIMBABWE – An endeavour to spend the Christmas day in South Africa with a family friend turned fatal after a Harare family perished in a car accident in Louis Trichardt.

Hillary Ruswa, 45, his wife Victoria ,42, and their two children Rutendo,15, and a two-year old baby perished when their Land Rover collided with a truck on Christmas day.

Their other two children survived and according to Hillary’s brother, Sylvester Ruswa, the two are still in a hospital in South Africa and are now out of danger.

“This has been a blow to the family. They were visiting a friend who had invited them for Christmas in Hoedspruit near Polokwane and they had left on December 24.

“The two surviving children are traumatised and we don’t know how they are going to cope after losing their entire family in an accident,’ said Sylvester at a funeral wake in Mbare.

According to Sylvester, Hillary had phoned the friend he was visiting indicating that he was tired and wanted to rest after he had crossed the border at around 2 am.

His wife is said to have taken over from him and she was driving when the accident occurred.

Hillary’s child hood friend said the loss of the four was a hard blow reminiscing how he had spent the previous Sunday with the family.

“I’m based in South Africa so when I arrived I phoned Hillary telling him that I had come for Christmas. We then spent the day together with our families that is when they told me of their trip to South Africa.

“They were supposed to be back this Wednesday and we hoped to be together on New Year and God has taken them so soon.

“He was my best man at my wedding and I was in turn his best man that is how close we were. He was like a brother to me and our wives were like sisters. I’m hurt, Hillary, Victoria and your two precious children have just left us too soon,” Afred Mapfumo grieved.

“We were friends since 1979 at the age of six and he was one of the people I could count on when I needed held. We went to school together up to the Ordinary Level and even after getting married, our families became very close. They were like family to me,” he added.

According to Alfred, the Ruswas were very active members at St Peters New Mbare and although they were now living in Hatfield, they were still worshipping at the Mbare Catholic Parish.

The Mbare Catholic community is still in shock and when H-Metro arrived at the wake, scores of residents who were at the wake expressed shock saying that they had lost a very good committed couple.

“Hillary grew up in Mbare and he was a very active member at St Peters. He served in the top board for the youths in the Harare Archdiocese. We fondly called them sekuru and mbuya Ruswa.

“Our parish and Harare Catholic community is poor without them. God has called them and I pray he gives their remaining children and family strength to move on,” said one of the mourners.

Sylvester said some family members had gone to South Africa to arrange for the four’s repatriation adding that they expected the bodies maybe by Friday and they will be buried in Zvimba.

ZIMBABWE - An endeavour to spend the Christmas day in South Africa with a family friend turned fatal after a Harare family perished in a car accident in Louis Trichardt. Hillary Ruswa, 45, his wife Victoria ,42, and their two children Rutendo,15, and a two...
Share via
x
More Information