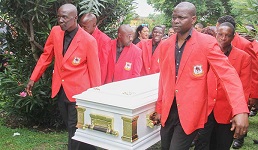 ZIMBABWE – Motor Action Football Club owner Eric Rosen, who died on Sunday, was laid to rest in Harare yesterday, with more than 400 people braving the foul weather to pay their last respects to the man roundly described as “selfless”.

The funeral proceedings, attended by Rosen’s family and friends, the football fraternity and businesspeople, started with a church service being held at Nazareth Catholic Church before proceeding to his Motor Action Sports Club for the speeches.

After eulogies and tributes, the body was taken to Greendale Cemetery for burial.

Family spokesperson and master of ceremony, Simeone Jamanda, who worked closely with Rosen from the time Motor Action was formed in 2000 to 2014, when the club collapsed, said: “We are not mourning Rosen’s death, but celebrating the life of a man who contributed immensely to the development of football in the country.”

Rosen, survived by his wife Elizabeth and three children, died at a time he was setting up an academy at Motor Action Sports Club.

Below are some of the tributes to Rosen:

Ndebele said: “We are bidding farewell to one of Zimbabwe’s true football persons. We have lost a leader, a father, a mentor and a brother. He was one of the pillars of the development of football in the PSL. He was a frank man who stood for what he believed in. He dedicated his life to football. Basically, he was a football addict. Even in a packed stadium when the Mighty Bulls were playing, you would hear Eric’s horn and Liz shouting and celebrating. Eric was instrumental in the conclusion of the partnership between PSL and SuperSport.”

Sibanda pledged that Zifa will help in the establishment of Rosen academy.

“He made an immense contribution to the beautiful game. He touched the lives of people through his Mighty Bulls brand. He was an astute football administrator and a sharp businessman, we are poorer today with his departure. Eric deserves football knighthood following his heroic and patriotic contributions to the economy of football and that of Zimbabwe also. His great work should be written in bold letters in the history books of Zimbabwean football. We at Zifa are going to assist in any way (in the establishment of the academy) throughout. Eric dedicated his life and was a great volunteer to football, and he did well.

Jamanda said: “This man was my best friend. All of you who knew Eric, know Jamanda. Where Eric was, that’s where Jamanda was. We used to travel with Eric and I would sit in the front seat and Liz at the back, then we would start arguing about how the goal would have gone in, should we fire Joey (Antipas), should we replace him with Bigboy Mawiwi or get Keegan Mumba. That was me and Eric Rosen. Today I have heard testimonies of what Eric did, he left a legacy.”

Former Motor Action player Milanzi said: “We are here to celebrate the life of a man who brought life to Zimbabwean football. He was a great man. He helped us as players to realise that our dreams were not only in football, but in the community that we lived in. He brought a different meaning to football. To him, football was a vehicle to uplift the livelihoods of people. He was our father and a great father, who would teach us life. He was firm in his words and he contributed immensely to most of us. He sent some of our guys to school and even employed some of the players upon retirement.

“He really wanted his team to excel and he would always talk about going to play in Accra, Ghana, meaning he wanted to play in Africa. We eventually won the league in 2010 and played in the Caf Champion League, so I know he died a happy man. He used his personal resources to better our lives and he was getting nothing out of it. He was a selfless man.”

ZIMBABWE - Motor Action Football Club owner Eric Rosen, who died on Sunday, was laid to rest in Harare yesterday, with more than 400 people braving the foul weather to pay their last respects to the man roundly described as “selfless”. The funeral proc...
Share via
x
More Information