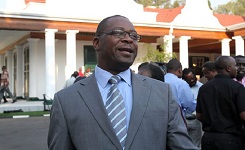 ZIMBABWE – The fast-track land resettlement programme has run its course with the exhaustion of new farms for acquisition amid indications that further allocations can only be done after the envisaged land audit reveals how much land can be reassigned to new applicants, a Cabinet minister has said.

Lands and Rural Resettlement Minister Dr Douglas Mombeshora said Government had settled people on more over 14 million hectares and that the remaining 900 000ha would be kept as a strategic reserve.

“What we are saying is that the land resettlement programme is almost complete. If we are to get additional land, it would only be after the finalisation of an audit because we realise that some people are either not fully utilising the land or have not taken occupation of the land that they got from the Government,” said Minister Mombeshora in an interview.

“We have resettled people on about 14,5 million hectares and the remaining 900 000 is in forests, plantations and Bilateral Investment Promotion and Protection Agreements. That land should be left for strategic reasons,” he said.

Minister Mombeshora said there would be no more resettlement under the fast-track land reform programme launched by the Government more than 15 years ago.

Government, he said, was currently involved in the rationalisation of land occupation after settling hundreds of thousand of people in both small and large scale farms.

He said the remaining 900 000 hectares of land could be used for relocation should such a need arise.

“As Government, we need to prepare for anything. For example, when diamonds were discovered in Chiadzwa we had to relocate people. If, for example, a dam is to be constructed we again ought to relocate people. This is the reason why we are saying we cannot resettle people on the remaining land,” said Minister Mombeshora.

Meanwhile our Bulawayo Bureau reports that Minister Mombeshora told farmers gathered in Shangani, Matabeleland South province, at the launch of a new conservation area at Jabula Safari, that those who needed to be resettled would have to wait for the finalisation of the land audit.

“Tough lucky to those who need to be resettled because land is almost exhausted. We, however, hope that when we do the audit we may be able to pick land which is either not being properly used or was gotten for speculative purposes,” said Minister Mombeshora.

He said Government was finalising paperwork to make the land bankable and transferable as part of securitizing it.

“We are looking at the issue of surveying new farms which we have just acquired and last year we recruited 15 more qualified surveyors in addition to the four that we had as well as 17 surveying technicians to be able to do the work,” he said.

“We are working on acquiring GPS (Global Positioning System) equipment so that we do the work faster. In fact the new GPS system is 10 times faster than the old system that we have. Treasury has also agreed to give us money to buy six sets of the GPS and this will speed up the surveying,” said the Minister.

When Government embarked on the fast track land reform programme, there was resistance from sections of the population, in particularly those aligned to the opposition MDC who viewed the programme as an election gimmick.

Of late more people have been making enquiries to the Ministry of Lands and Rural Resettlement after it became clear during the period of the Inclusive Government that the programme was irreversible.

More than 300 000 families have been resettled under the fast track land reform programme that started in 2 000.

ZIMBABWE - The fast-track land resettlement programme has run its course with the exhaustion of new farms for acquisition amid indications that further allocations can only be done after the envisaged land audit reveals how much land can be reassigned to n...
Share via
x
More Information
x