ZIMBABWE – fastjet on Monday, 18 January, announced its newest international routes – from Johannesburg to Harare and Victoria Falls in Zimbabwe.

The launch of these routes comes after fastjet received clearance from the Zimbabwean and South African governments to operate flights between the two respective countries.

The Johannesburg/Harare route will commence on 1 February 2016 and operate daily with an additional daily flight on this route expected soon, the airline said in a statement.

Flights linking Victoria Falls to and from Johannesburg will initially be three times a week on Sundays, Wednesdays and Fridays, commencing 3 February 2016.

Tickets for flights will be on sale this week, with fastjet advising passengers to book early to take advantage of its lowest priced fares on both routes of R1 340* ($80) one-way. This excludes government and airport taxes (R837 [$50] departing Zimbabwe / R586 [$35] departing South Africa).

The initial daily flights will depart from Harare at 06:15 and land in Johannesburg at 07:55, a flight time of 1 hour 40 minutes. The return flight from Johannesburg to Harare departs at 08:40, landing at 10:15 (all local times).

Finalised slots and timetables for the flights linking Victoria Falls and Johannesburg are still to be confirmed by the respective airports.

The flights to Harare and Victoria Falls mark the third and fourth international routes for fastjet from South Africa with the airline presently operating to Dar es Salaam and Zanzibar.

fastjet also announced that it expects to receive approval for additional international flights to commence from Zimbabwe to further East and Southern Africa markets within the first quarter of 2016.

“The only alternative to flying is to undertake long and uncomfortable journeys by road, which can take up to 20 hours from Johannesburg to Harare or Victoria Falls,”  fastjet’s Chief Commercial Officer Richard Bodin, says.

“As has been the case with other routes that we have launched, we expect many of our passengers to be first time flyers who, because of prohibitively high fares, could not afford to travel by air previously,” as recent research undertaken by the fastjet shows up to 40% of passengers on all routes are first time flyers able to afford air travel for the first time.

Available for purchase on these routes will be fastjet’s luggage upgrade option, ‘Freighty’, that allows passengers to transport up to 80kg of checked in bags.

The Freighty luggage option in particular is expected to be popular with traders flying with fastjet to purchase wholesale produce in Johannesburg to transport back to their home markets to sell. 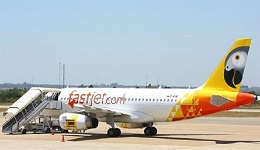 ZIMBABWE - fastjet on Monday, 18 January, announced its newest international routes - from Johannesburg to Harare and Victoria Falls in Zimbabwe. The launch of these routes comes after fastjet received clearance from the Zimbabwean and South African govern...
Share via
x
More Information
x