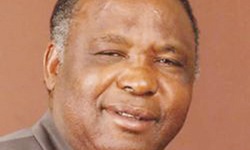 ZIMBABWE – A storm is brewing around the funeral of national hero Aguy Clement Georgias, amid reports there are two funeral wakes for the industrialist-cum-politician, as government had recognised the deceased’s “girlfriend”, NewsDay has learnt.

The disgruntled relatives and Manana were gathered at the hero’s Highlands home yesterday.

Born Aguy Zvavahera Ushe in Chivhu 80 years ago, Georgias died last Friday after heart and kidney complications and was declared a national hero.

“We feel cheated. We are aware that our President [Robert Mugabe] is on record recognising our cultural values, but now we are shocked that government officials are recognising a girlfriend,” Georgias’ brother, Herbert Ushe told NewsDay.

Herbert said he grew up with Georgias in Unyetu-Mutomba Village before his enterprising sibling made the great trek to Harare and assumed a new identity.

“We grew up in Chikomba like all other African families of that time, but Aguy came to Harare and decided to change his name, maybe for economic reasons. We had no problems with that because it helped him. He identified with the coloured community, but everybody knows that he is black and a Shona from Chikomba of the Mhofu totem,” he revealed.

“He is of the Mutekedza chieftainship. How then can a man like that be said not to have rural roots. We will not set foot at the national shrine. Our plea is for government to recognise our rightful place in all this as Georgias’ family members.

“We need our traditions followed like all people of his clan. As a family, we have sought audience even with the permanent secretary of Home Affairs, Melusi Matshiya, but nothing has come of it despite promises.”

Chombo, who is also Zanu PF secretary for administration, said the party and government had acted on the basis of information provided by the party’s Harare provincial leadership.

“I am not really aware of those things [family feud], but as a party and government, we acted on information provided to us by the Harare Metropolitan province. They requested he be declared a national hero and the curriculum vitae we received and circulated was accepted as reflective of his personal profile and contribution to the party and country,” he said.

Asked if he had been approached, Chombo retorted; “To do what? We received official communication through the party channels and acted on it. There is nothing more we can do. Maybe those in Harare province have a better idea.”

According to Carlton Ushe, one of Georgias’ nephews, the late former Economic Development deputy minister sired five children with an unnamed Gweru woman of Indian origin before marrying Manana in 1977.

He was to later “hook-up with a mistress Jane with whom he had another five children but she already had six children from a previous marriage,” Carlton claimed.
A grief stricken Manana refused to say much.

Georgias is not new to controversy. In September 2014, he sued the European Union (EU) for €6 million damages for imposing sanctions on himself and the Zanu PF leadership but his application was dismissed by the EU General Court. This followed his deportation from the United Kingdom in 2007 after he was placed on the EU sanctions list.

In September this year, he was in the news again when he lost a local court case where he was seeking to defend his company Trinity Engineering’s property from being bonded over his son Russel Karimazondo’s $686 172 debt with Telecel Zimbabwe.

Georgias was accusing Karimazondo of forging his signature on a power of attorney, which he allegedly submitted to register a mortgage bond and secured a $500 000 credit from Telecel Zimbabwe.

ZIMBABWE - A storm is brewing around the funeral of national hero Aguy Clement Georgias, amid reports there are two funeral wakes for the industrialist-cum-politician, as government had recognised the deceased’s “girlfriend”, NewsDay has learnt.  Ye...
Share via
x
More Information
x