First Lady her own woman: Mugabe 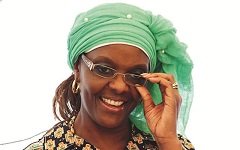 ZIMBABWE – PRESIDENT Robert Mugabe has refuted claims that he was guiding the political career of his wife, Cde Grace Mugabe, who is also the Zanu-PF secretary for Women’s Affairs.

He said the First Lady was independent and the decision to join fulltime politics was entirely hers.

The Zanu-PF leader said the First Lady was fully aware that politics was a “rough terrain”, adding: “She’s a rough swimmer herself… mature as well.”

President Mugabe said even some of his family members were in politics by their own choice.

He said he told them that politics was not an easy go and they should not blame anyone for whatever they met in their political journeys.

He said he gave the same advice to the First Lady.

“I said so to Grace, I said fine, yes, I will support you but coming into politics the decision is entirely yours. You’re free and so there she is. Ideas are entirely her own. That’s where we’ve individual ideas — the area where we’re allowed in the party to have individual ideas,” President Mugabe said last night, speaking to the ZBC during an interview to mark his 92nd birthday.

“But of course salient ideas, policy-related ideas have to be the same and so that’s the area where we’re the same.

“She leads the women. These are ideas from the women and not from me. The women have their own ideas, their own cries. And of course from the family point of view she will express herself.”

President Mugabe said he had heard that some people were “not happy” after the First Lady appeared to criticise elements of the military over their role in a plot to bomb the First Family’s Alpha Omega dairy plant in Mazowe.

The plot was foiled by the police who arrested four men, among them to serving soldiers.

President Mugabe quipped: “You’re unhappy that she expressed herself? Why plan it in the first place?”

First Lady her own woman: Mugabe

ZIMBABWE - PRESIDENT Robert Mugabe has refuted claims that he was guiding the political career of his wife, Cde Grace Mugabe, who is also the Zanu-PF secretary for Women’s Affairs. He said the First Lady was independent and the decision to join fulltime ...
Share via
x
More Information