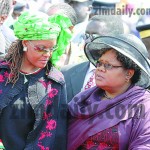 ZIMBABWE – First Lady Grace Mugabe has claimed that she is hurt that former Vice-President Joice Mujuru had to be expelled from the ruling party last year.

President Robert Mugabe’s wife said this to thousands who braved the searing heat and gathered at a rally in Rushinga in Mashonaland Central province.

She said her suspicions that the Mujuru faction was working with the opposition had been vindicated.

There are people who died in Mozambique during the war and their graves are there.as you mother I am reminding you never to forget how we got our independence.

A lot of people from this province sacrificed their lives to secure this nation’s independence.

It’s cold outside Zanu PF that is why you find some people suspended from the party but are attending this rally.

Some people think that since they fought in the war it gives them the right to misbehave. It happened to one of our own from this province and it hurts us as women, Grace told her captivate audience.

Some people are working hard to keep the party united and instead of uniting some went on to unite with our detractors.

Mugabe’s wife was at the forefront of a smear campaign against Mujuru then viewed as one of the leading figures to take over from the 91 year old leader.

Mujuru was accused of working with western countries hostile to Mugabe to topple his government.

Despite her spirited denials the former VP was forced out of the party in brutal fashion along with dozens of her lieutenants who included cabinet ministers and provincial leaders.

At the time of her countrywide campaign to get Mujuru sacked, Grace did not show any sympathy for the then embattled VP and even when then information minister Jonathan Moyo described the accusations against the country’s former number two as political banter the First Lady continued to stick to her accusations.

Former transport minister Nicholas Goche, suspended from the party for three years for his alleged role in trying to recruit Israeli hit-men to take out Mugabe, attended the Rushinga rally.

With Mujuru now reportedly mulling coming back to the political fold by leading a group of disgruntled former Zanu PF members under the banner of People First, reports have also suggested that some of her followers are afraid of being arrested because of the many crimes they committed in the name of the ruling party at their political prime.

ZIMBABWE - First Lady Grace Mugabe has claimed that she is hurt that former Vice-President Joice Mujuru had to be expelled from the ruling party last year. President Robert Mugabe's wife said this to thousands who braved the searing heat and gathered at a...
Share via
x
More Information