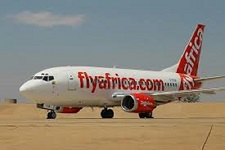 ZIMBABWE – Reports from Harare suggest that Fly Africa Zimbabwe has managed to get their Air Operator Certificate (AOC) back, reportedly after making a major down payment to the Zimbabwe Revenue Authority which had filed a claim of some US$2.4 million against the airline. Where those funds came from could not be ascertained though a Zimbabwe-based aviation source, but suggested it could have been an investor ready to take a gamble with their money. If this will trigger another aviation revolution in accordance with the airline’s slogan, however, remains to be seen.

It could not be established if the local Zimbabwean partners will not take the matter back to court as their own grievances against the Fly Africa management based outside Zimbabwe has apparently not been addressed, as a recent comment posted by them on this correspondent’s blog confirms.

The leased aircraft by Fly Africa Zimbabwe has also been returned to the lessors when it became apparent that the flight ban, contrary to constant assurances given by the airline on social media, was to take a while to be lifted, almost to the day now for 2 months.

Local aviation sources in Harare also claim that the exodus of staff from Fly Africa, allegedly over non-payment of wages and salaries, will make it difficult for the airline to resume flight operations any time soon, besides the massive loss of confidence in the market over the past promises not kept and scores of clients still waiting for refunds. No update has been posted on the Fly Africa Zimbabwe Facebook page with the last entry being an utterance over the airline’s problems with phone connections, dated December 9. Perhaps the social media team of Fly Africa Zimbabwe has also defected?