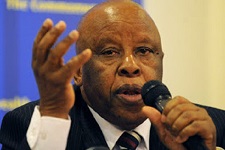 In a recent interview with a United Nations online magazine, Africa Renewal, Mogae, who is Vice-President Phelekezela Mphoko’s business partner in the Choppies Supermarket group, accused Mugabe and his Zanu PF administration of “thinking they are more important than his country”.

“Sovereignty has limits like any other right. A leader cannot kill and harass his people and hide behind sovereignty. A true leader does not kill, but protects his people,” Mogae said.

“We still have leaders in Africa who think they are indispensable, larger than life and more important than their countries. That must stop. If a leader loses control, the world will and should intervene to save the people.”

Responding to reports that some African leaders were of the view that gay rights were un-African, after applauding Mugabe when he declared at the UN 70th General Assembly that Africans were not gay, the ex-Botswana leader said: “It’s not surprising that we appear to be speaking from different corners of the mouth. Differences in opinion are welcome”. Mogae, who was recently in Zimbabwe for the official opening of a Choppies supermarket in Chitungwiza by Mugabe, said the Zimbabwean leader should dump “outdated beliefs”.

“While I admit that the West often push their agendas on Africa, which we must be wary of, I also believe we must, as Africans, admit that the world is changing and we must move with the times,” he told the magazine.

“This means often abandoning some of our long-held convictions about life, if the need arises.

“In my long interaction with LGBT [lesbian, gay, bi-sexual and trans-sexual] groups and extensive research, I have come to the
realisation that we are limited in our knowledge and must be open to new discoveries. I have been converted; I used to hold the same beliefs as my counterparts.

“President Mugabe has said that he hates homosexuals and is on record as saying they are worse than pigs and dogs. That is still his
position.

“Leadership is not always about you, it is about people and often circumstances. I call upon African leaders to open up to second
generation rights.”

Information, Media and Broadcasting Services minister Christopher Mushohwe yesterday said: “I read it, he did not mention the President by name, but if indeed he was referring to President Mugabe, it is unfortunate. He said it while he was in America, maybe he wanted to please the New Yorkers. Why does he wait to be in America to say it? Why not say it while he is in Africa? He was here a few days ago, why didn’t he say it? If he couldn’t do it here, he could have said it while in Botswana. That is the problem with most African leaders, they think if they are in Europe, they are Europeans, if they are in America, they are Americans.”

Mugabe is an avowed critic of homosexuals and infamously described them as “worse than pigs and dogs”.

Botswana has remained a lone voice in the region against Mugabe’s perceived excesses, demanding a return to legitimacy and respect of human rights in Zimbabwe, much to the chagrin of the veteran Zanu PF leader.

Gay rights remain a contentious issue in Southern Africa with South Africa being the only country to recognise homosexual marriages.