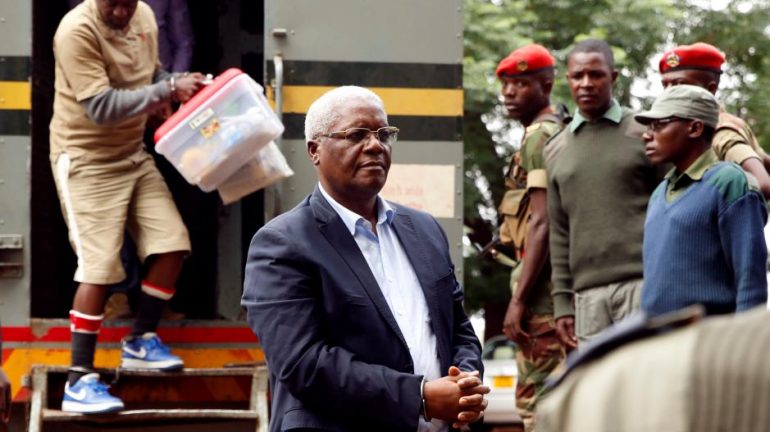 HARARE – The trial of former Minister, Ignatius Chombo, who is being accused of duping the Reserve Bank of Zimbabwe of $14 billion, has been deferred to next month. Chombo appeared before Harare magistrate Vongai Guwuriro. He was remanded to April 7, after his lawyers produced a notice from the Constitutional Court, that the appeal matter will be determined this month, on March 22.

Chombo is being accused of fraud and criminal abuse of public office. Allegations are that sometime in October 2005, Chombo applied for a Capital Expenditure Loan of $14 billion. The loan was to be paid back in instalments within 18 months. Chombo allegedly gave his address as Allan Grange Farm, Raffingora.

He allegedly misrepresented that he wanted to use the proposed funds to buy a 30-tonne lorry, a 30-tonne truck, a 200 HorsePower tractor, a 4-wheel drive combine harvester, a 52 dish roam disc, 9 row monosem planter and two 500kg chicken feed mixers.

The court heard that in December of the same year, Chombo approached Ajit Patel, who was the managing director of AJ’s Motor Centre (Private) Limited, located in Harare.

He ordered two Toyota Hilux Vigo double cabs, which were valued at $5.5 billion each. It is the State’s case that on December 13, a loan of $14 billion was approved, and credited into Chombo’s CBZ account. Two days later, Chombo transfered $14 billion from his account into the account of Red Beard Investments, trading as Equivest Asset Management.

On January 25, Chombo issued another CBZ cheque of $500 million to AJ’s Motor Centre. Another $2 billion was issued to Premium Banking Corporation and was deducted from Chombo’s CBZ Bank and deposited in Growfin Investments Company account.

Ajit Patel is said to have opened an investment account where Chombo credited with $4 billion debited from his CBZ Account as part payment for the two Toyota Hilux Vigos. The court heard that one of the cars was supplied in the name of Pokello Nare.

On his other count, Chombo allegedly acquired a piece of land in Helensville, which had been reserved by the City of Harare to construct cluster houses, and registered it under his company called Harvest-Net Enterprises (Pvt) Ltd. Lovett Masuku appeared for the State.

HARARE - The trial of former Minister, Ignatius Chombo, who is being accused of duping the Reserve Bank of Zimbabwe of $14 billion, has been deferred to next month. Chombo appeared before Harare magistrate Vongai Guwuriro. He was remanded to April 7, after...
Share via
x
More Information