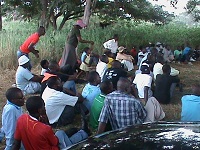 ZIMBABWE – Supporters of People First or PF, a new political party which was officially registered with the Zimbabwe Electoral Commission last Friday, say they will now start campaigning for the party ahead of the 2018 general elections.

There was jubilation and ululation among People First members when they held their first meeting in Chinhoyi on Saturday. They were happy that the party has finally been officially registered in Zimbabwe.

The PF members, who addressed each other as nation builders, said the registration will now enable them to freely mobilize the electorate, hold rallies and public meetings without fear of the police.

The organizer of Saturday’s meeting, former Zanu PF and MDC-T provincial member, Tendai Musonza, said many MDC and Zanu PF followers were waiting for the party to register in order to join it.

Speaking at the meeting, Abigail Sauti, a former MDC-T National Council member, said she felt overwhelmed by the registration as this will allow them to market their party as many people were hesitant to join them because they were not registered.

Responding to questions, another former Zanu PF Mhondoro Mubayira Member of Parliament, Sylvester Nguni, said unlike other political parties, PF has term limits of two five-year terms on any position.