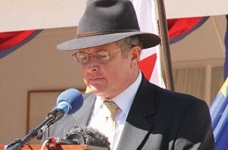 ZIMBABWE – France says it has shifted its “confrontational” engagement strategy to a “persuasive” approach towards the Harare government in the search for missing political and human rights activist Itai Dzamara.

France is one of the western countries piling pressure on government to intensify the search for the missing ex-journalist.

Unimpressed with the pressure, government, through Foreign Affairs Minister Simbarashe Mumbengegwi at one point summoned France’s envoy to Harare, Laurent Delahousse, and threatened him with deportation.

Mumbengegwi charged the envoy with meddling in Zimbabwe’s internal politics.

Delahousse had insisted that government was responsible for Dzamara’s disappearance.

However, in an interview with NewZimbabwe.com in Harare Thursday evening, ambassador Delahousse said they have dropped their “confrontational” approach towards government on the Dzamara issue.

“We have decided to change our strategy and to engage in a different form of persuasion on this issue,” he said.

“We have decided to lay low on the media side and we hope this will continue encouraging the relevant authorities to do what it takes to solve this issue.”

Dzamara was abducted by suspected State agents on March 9 last year in his Glenview home area while having a haircut at a local barbershop.

Since his disappearance, the church, civil society organisations and the international community have been encouraging government to find the activist.

Ambassador Delahousse said although they have changed their engagement strategy, they still believe that the State is responsible for Dzamara’s abduction and disappearance.

ZIMBABWE - France says it has shifted its 'confrontational' engagement strategy to a 'persuasive' approach towards the Harare government in the search for missing political and human rights activist Itai Dzamara. France is one of the western countries ...
Share via
x
More Information