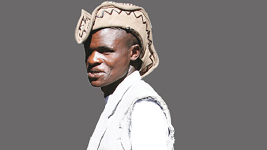 ZIMBABWE – Comedian-cum-musician Freddy Manjalima popularly known as Kapfupi in the music and drama industry is set to release a rare DVD anytime in February.

The rare DVD which will be a combination of a drama and music videos is going to be the first of its kind in Zimbabwe.

As it is work in progress the DVD have not been named yet.

In an interview with the comedian’s brother as well as his manager said the DVD will be the best of its kind.

“The DVD that we are working on right now is different in our industry, it’s going to be a two in one meaning there is going to be a drama and music videos as well.

“Our DVD is the first of its kind here in Zimbabwe as our fans will first enjoy the drama before they go on to watch the musical videos on the same DVD,” he said

He said the music videos will be from their previous album Tooth Brush with songs such as Tooth Brush, Kuvimbika, Sadza ne zondo featuring Mai Nga and the Bonus track Madamburo.

The Mai Nga hit maker through his manager said they are in the studios working on this DVD and fans should expect the best from it.

US $50 Billion in Diaspora Can Transform Zimbabwe – Minister