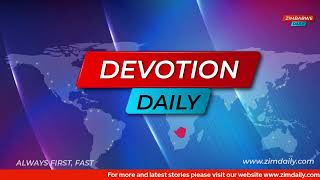 20 Among them are Hymenaeus and Alexander, whom I have handed over to Satan to be taught not to blaspheme.[+] Show More
Prev 1 of 127 Next

ON 8 January 2021, Zimbabwean police arrested award-winning journalist Hopewell Chin’ono at his home in Harare for allegedly publishing a falsehood or communicating false information which is prejudicial to the state.

After that police also arrested opposition leaders Job Sikhala and Fadzayi Mahere on the same charges.

This emanated from a widely circulated video on social media in which a police officer is seen quarrelling amid pushing and shoving with a group of people accusing him of striking and killing a baby with a baton.

The mother of the baby is also seen grabbing the policeman, with people saying the police officer had killed the child.

However, police say they later investigated and found out that the scuffle had indeed happened after the police officer had shattered a windscreen of a Kombi with the baton, resulting in the baby being hit by debris, but eventually the child did not die as initially feared by the mother and the crowd, and was later widely circulated by Chin’ono and others.

As a result, Chin’ono was arrested and is being charged under Section 31 (a)(iii) of the Criminal (Codification and Reform) Act. This part of the law has since been repealed; it no longer exists.

A Constitutional Court judgment exists in the case of Constantine Chimakure and others (CCZ6 of 2014), ruling that the offence Chin’ono is currently facing is non-existent as it was struck off in 2014 as unconstitutional anyway.

This clearly means Chin’ono’s arrest is arbitrary and has no foundation at law.
Constitutionally and legally, he cannot be convicted on a law that does not exist and on something which is not an offence at law.

This means the police’s case against Chin’ono has no legal basis at all, not just because the law was repealed as it was unconstitutional, but also because the state – as the Constitutional Court ruled – cannot appoint itself and arrogate itself powers of being a monitor of truth.

That is not the function of the state. A state cannot and should not behave like an unruly class monitor – or bully-harassing journalists and citizens, prescribing to them what is truly out there and what is not.

While freedom of expression and media freedom is not absolute – in other words they have limits – those fetters are clearly defined and articulated in the constitution and the law.

The grounds upon which freedom of expression and media freedom are legally restricted are spelt out clearly and unambiguously in the constitution.

This is because freedom of expression and media freedom are fundamental and critical, hence entrenched rights, and a cornerstone to the building of a free and democratic society, which Zimbabwe aspires to be.

Strong constitutional protection of freedom of expression and press freedom cannot tolerate the imposition of self-censorship on free speech and press through fear of arrests or lengthy sentences of imprisonment for offences of publishing or communicating false news, as the court ruled.

In 2000 the UN Special Rapporteur commented on false news arrests and issues saying: “In the case of offences such as publishing or broadcasting ‘false’ or ‘alarmist’ information, arrests and prison terms are both reprehensible and out of proportion to the harm suffered by the victim.” This is simply because a free press is the lifeblood of any democracy.

Journalists, of course, must always verify their stories first – in other words, uphold the ethics, values and principles of the profession- and check information before publishing, but this cannot be a pretext for police to arrest journalists arbitrarily and outside the law.

Journalism is basically a science of verification, yet arbitrary arrests are not the solution if and when journalists fail in their responsibilities and duties.

We urge law enforcement agents to do their job professionally and within the limits of the law, not to act arbitrarily, in as much as we urge journalists to be professional.

By arresting Chin’ono and other journalists arbitrarily, the Zimbabwean state will be contravening not just its own constitution, but also the African Charter for Human Rights, in particular Article 6 and Article 14, which Zimbabwe signed and ratified.

This means SADC and the African Union should always speak out against such violations of freedom of expression and press freedom.

We, therefore, note with dismay SADC and the AU’s silence at this gross violation of freedom of expression, press freedom and indeed human rights.

We further note that this is not the first time this has happened in Zimbabwe. Journalists have routinely been arrested and intimidated in Zimbabwe – for years.

It is not the first time Chin’ono himself has been arrested. It’s the third time in as many months.

By arresting and harassing journalists, the government is not only inflicting pain on the media practitioner concerned and sending a chilling effect across the media landscape but also damaging its own image irreparably in the process.

There is nothing to be achieved and gained by arresting journalists and indeed citizens in general, except damaging government’s reputation and making Zimbabwe appear like an authoritarian, rogue state.

Together, we can make Zimbabwe a safe place for journalists to work in and a better nation for all to live in.