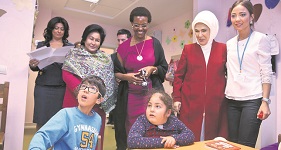 ZIMBABWE – The first ladies of the G20 Summit paid a visit to Döşemealtı Rehabilitation Center and School for students with mental and physical disabilities in Antalya as part of a special program hosted by President Recep Tayyip Erdoğan’s wife Emine Erdoğan and Primer Minister Ahmet Davutoğlu’s wife Sare Davutoğlu.

The school’s students did a folk dance show for the summit’s first ladies along with a piano concert. Some students introduced themselves through sign language. Erdoğan later showed the school to the wives of the presidents. The first ladies visited both a secondary and pre-school class and received information about the center. Grace Mugabe showed special attention to a 6-year-old student with both mental and physical disabilities. They visited the school’s different sections such as textile and candle design workshops. Teachers accompanied them during the visit and were told about physical therapy and hydrotherapy treatments. All the first ladies were presented with hand-made presents following their visit.

The G20 program for first ladies includes tourist visits to Antalya’s historic areas including the ancient cities of Side and Perga and Aspendos Ancient Theater. The first ladies also had the chance to taste Turkey’s culinary delights like traditional Turkish coffee, which were offered in a giant tent for cultural events. The well-known examples of Turkish art, like miniatures and marbling as well as hand-woven designs, were on display. Extending over an area of 6,000 square meters, the tent established in the summit venue’s garden have different stands representing different cultural items from around Turkey. From local tastes to various tourist attractions in Turkey, the tent also hosted traditional dance shows.

A special programme for first ladies at the G20 summit covers visits to Antalya’s historic attractions and cultural events at the summit venue. The first ladies also paid a visit to a rehabilitation school.

ZIMBABWE - The first ladies of the G20 Summit paid a visit to Döşemealtı Rehabilitation Center and School for students with mental and physical disabilities in Antalya as part of a special program hosted by President Recep Tayyip Erdoğan’s wife Emine...
Share via
x
More Information
x