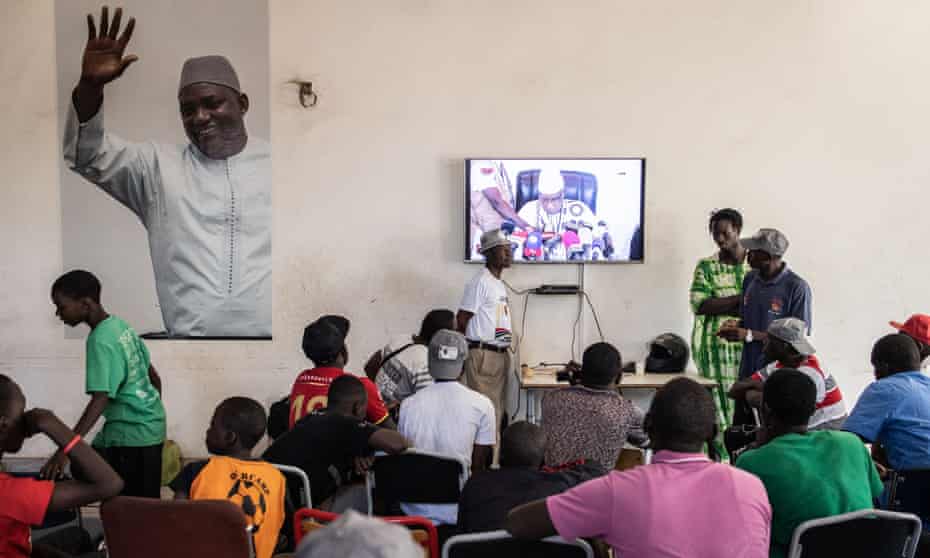 According to official results announced by the electoral commission, Barrow received about 53% of Saturday’s vote, far outstripping his nearest rival, political veteran Ousainou Darboe, who won about 28%. In 2016 Barrow unseated the former president Yahya Jammeh, who is accused of human rights abuses and corruption.

Saturday’s vote is being seen as a key test of stability as it was the first since Jammeh was forced into exile after refusing to concede defeat, and was the first vote in more than 27 years without him as a candidate.

The commission reported the final results on Sunday: Barrow’s main opponent, the United Democratic party (UDP) leader, Darboe, won 238, 253 votes, compared with the incumbent’s 457,519. The total number of votes cast came in at 859,567 – fewer than the more than 962,000 who had registered to vote.

Once cowed by Jammeh’s omnipresent secret police, crowds of people hit the streets of Banjul on Sunday night to celebrate, or drove around in their cars, honking horns. Hundreds gathered in a park opposite the presidential palace to listen to Barrow speak

“Democracy has taken its course,” Barrow told the cheering crowd after the results were announced. “I have been the lucky person to be chosen by you. I’ll use all the resources to make Gambia a better place for all.”

Lamela Jallow, a National People’s party (NPP) supporter who works at a fish market, said he voted for Barrow because the incumbent had built roads and infrastructure projects in rural areas during his first term.

Darboe and two other opposition candidates – Mama Kandeh of the Gambia Democratic Congress, and the independent candidate Essa Faal – told reporters on Sunday evening they were concerned with the “inordinate delay” in the announcement of final results.

They also said their agents and representatives had raised “a number of issues” at polling stations and had not endorsed some results.

“Barrow is a thief,” said 19-year-old Fatou Matta Fofana. “I like UDP because they can do the job.”

Addressing the crowd, Darboe encouraged supporters to remain peaceful and promised to pursue legal options to challenge the results, before breaking into song along with his supporters.

Almami Fanding Taal, a UDP spokesman, said the party was investigating the registered number of voters in areas including the Upper River region, where it was working with the chairman of the Basse area council. He said discrepancies were discovered in some areas “in terms of the registered number of voters and the high voter turnout”. Based on their findings, they would decide whether or not to go to the courts.

Darboe, who was once Barrow’s mentor, ran against Jammeh in three previous elections but was arrested in 2016 and prevented from contesting. Barrow, who had not previously held office, stood in Darboe’s place and later appointed him to his cabinet, only to form a breakaway party in 2019.

Also that year, Barrow reneged on a campaign promise to only serve as a short-term transitional leader for three years, leading to large-scale protests.

In September, he was criticised for forming a political alliance with Jammeh’s former party, the Alliance for Patriotic Reorientation and Construction.

More recently, Barrow has come under fire for failing to make public the final report of a truth, reconciliation and reparations commission investigating human rights abuses under Jammeh’s regime. Critics say that was a calculated move to save him from having to take action on the report’s recommendations, potentially alienating the Jammeh supporters he was courting ahead of the election.

Seedy Njie, a deputy spokesperson for Barrow’s NPP, could not be reached for comment.

Nana-Jo N’dow, the founder of an NGO campaigning against enforced disappearances and summary executions, whose own father was disappeared under Jammeh’s regime in 2013, said the alliance showed “where Barrow’s priorities lie”. She also said his refusal to step down early was an indication that he “was not going to deliver on everything he promised”.

Jammeh himself rejected the alliance with Barrow’s party and instead threw his support behind a coalition led by opposition candidate Kandeh, who finished in third place, according to official figures. Jammeh had spoken by telephone at some of Kandeh’s rallies, dialling in from exile in Equatorial Guinea.

Other candidates included Halifa Sallah of the People’s Democratic Organisation for Independence and Socialism, who was in fourth place, and Abdoulie Jammeh, the former director general of the Gambia Civil Aviation Authority, in sixth place.

GAMBIA - Gambian opposition candidates have rejected the results of Saturday’s historic vote in the West African nation that suggest the incumbent president, Adama Barrow, had easily won re-election. According to official results announced by the elector...
Share via
x
More Information