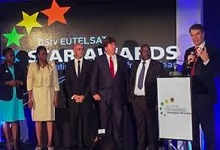 The winners of this year’s awards were announced yesterday during a ceremony held in Nairobi, Kenya, that also celebrated rising student interest in science and technology.

The fifth edition of the DStv Eutelsat Star Awards, organised by MultiChoice and Eutelsat, reached a record participation with nearly 2,000 entries from 18 countries. The winner in the essay category, Ayawen Asuinura from Ghana has won a trip to Paris and onwards to a launch site to witness a rocket blast into space to place a satellite into orbit.

This is the first win in the essay category for Ghana that has already produced two winners in the poster category.

The runner-up in the essay category was Sara Eribo from Equatorial Guinea who wins a trip for two to visit MultiChoice facilities and the South African National Space Agency near Johannesburg.

In the essay category, students were asked to interpret the quote by Socrates “Man must rise above the Earth, to the top of the atmosphere and beyond, for only thus will he fully understand the world in which he lives” and to show how satellites help understand and take care of our planet.

In the poster category, Mallon Marume from Zimbabwe scooped the first prize for artistic creativity and will visit Eutelsat in Paris to understand how satellites are operated and piloted in space and the many ways they benefit users.

This is a consecutive win for Zimbabwe as Joseph Mahiya won top honours in the essay category last year. Benjamin Ibanda from Uganda was the runner up in the same category. The four winning schools attended by the overall award winners and runners-up were also rewarded with a DStv installation, including dish, TV set, PVR decoder and free access to the DStv Education Bouquet.

“As the Jury Chairman of the DStv Eutelsat Star Awards over the last three years, I confirm that this year’s entries reaffirm the high standard of this unique competition. The quality and creativity of the finalists’ essays and artwork underscore the deep interest of Africa’s young generation in science and technology. I am truly honoured to be part of a competition that reveals some of Africa’s future thought leaders.”

The keynote speaker was Kenya’s Cabinet Secretary in the Ministry of ICT, Hon. Joe Mucheru who said:

“It is important to note that His Excellency President Uhuru Kenyatta and his government is determined to promote holistic development of the country covering all sectors with particular focus on leveraging science and technology in the delivery of services in all sectors of the economy including ICT and education.

“Therefore, it is gratifying to note the effort by both MultiChoice Africa and Eutelsat in ensuring that we nurture interest and build capacities in science and technology.”

ZIMBABWE -Zimbabwean scholar MALLON MARUME has won the DStv Eutelsat Star Award for the poster category. The winners of this year’s awards were announced yesterday during a ceremony held in Nairobi, Kenya, that also celebrated rising student interest in ...
Share via
x
More Information