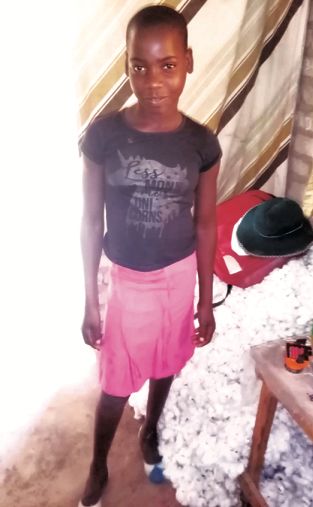 MANICALAND – The death of Anna ‘‘Memory’’ Machaya (14) while giving birth at the Johanne Marange Apostolic Church’s Mafararikwa Shrine during their Passover gathering last month has opened a Pandora’s Box after another 13-year-old girl was allegedly married off at the same time.

Although the church has spiritedly denied gathering last month, skeletons continue tumbling out of their closet as investigations by The Manica Post revealed that Violet Mushati, who was in the company of her grandmother Violet Saini Zhangaroti from Taruvinga Village in Mutiusinazita area of Buhera South, was last seen at the shrine on July 18.

Violet, who was doing Grade Seven at Barura Primary School, is reported to have ‘‘vanished’’ while they were preparing to leave for their Buhera home with other congregants.

Just like Anna Machaya, whose burial place is still unaccounted for, no one has leads on Violet’s whereabouts.

While Anna’s ‘‘husband’’, Hatirarami ‘‘Evans’’ Momberume is in remand prison facing murder and sleeping with a minor charges after he was arrested last week following a public outcry over the young ‘‘bride’s” death, Violet’s ‘‘husband’’ remains a mysterious figure.

Although, Zhangaroti and her husband, Enock Mushati Mucharwa have continued expressing ignorance over the young girl’s whereabouts, Violet’s South Africa-based father, Tinashe Mushati Mucharwa and other relatives believe that she was married off during the church gathering.

Relatives claim that from their enquiries, they had gathered that Violet was lured by a ‘‘suitor’’ who was flaunting United States of America dollars while spoiling her with snacks during the church gathering.

Some of the Mucharwas claim that Violet’s ‘‘marriage’’ could have been settled by goodies like sugar and a small monetary token reportedly given to her grandparents.

Her 13-year-old cousin was reportedly married off last year in similar fashion. The girl is said to have recently lost her baby after complications during delivery.

Despite Violet having ‘‘disappeared’’ a month ago, Zhangaroti only made a missing person report with the police on Tuesday this week.

Police could neither confirm nor deny receiving such a report, with Manicaland provincial police spokesperson, Inspector Luxson Chananda saying: “Our office is yet to receive such a report. We will continue checking with our counterparts at Mutiusinazita.”

As The Manica Post probed Violet’s whereabouts, Zhangaroti on Tuesday, said: “I am on my way to Mutiusinazita Police Station to make a report on Violet’s ‘‘disappearance’’. She vanished soon after our Passover gathering at Mafararikwa Shrine on July 18. We were together at the Marange gathering and she ‘‘disappeared’’ as we were about to leave for Buhera.

“I tried to locate her in vain. I was having a terrible headache and was advised to go and rest at home. Some people are saying Violet eloped with another congregant, but these are unsubstantial rumours. She is still too young to be married. We have looked for her everywhere and I could not make a police report all this time because I was bedridden. Her disappearance is not something new as these cases are common after our church gatherings.”

However, a bitter Tinashe in an interview from his South Africa base, said he believes his daughter was now staying with her ‘‘husband’’.

“My brother, it is difficult to fathom that someone is staying with my daughter as a wife. I keen to know the truth because I am not buying my parents’ explanation of Violet’s disappearance. We sent out search parties all over, but this has drawn blanks.

“I was once a member of this church and I left after failing to agree with some of their doctrines. There are a lot of abuses in the church. I will not rest until I know the whereabouts of my daughter.

‘‘Justice should prevail and I want my daughter to continue with her education. Had it not been for work commitments here, I would have come on the ground and do everything possible to rescue my daughter from this bondage. If my parents know the truth, they should assist us in locating my daughter because this is causing me sleepless nights,” complained Tinashe who separated with Violet’s mother.

An uncle, Innocent Mucharwa, said: “My brother, Enock Mushati Mucharwa and his wife, Zhangaroti know Violet’s whereabouts. This is not the first incident to be reported in this family. Tafadzwa is between a rock and a hard place because while he wants justice to prevail, he cannot expose his parents’ shenanigans.

“All his sisters were married off in the same manner. Last year, one of his sisters was married off at 13 and gave birth this year. The baby died soon after delivery due to birth complications.”

Another uncle who is reported to have let the cat out of the bag, Elton Mucharwa, also confirmed that Violet’s case was just a tip of the iceberg.

“She is not the first to be married off. Enough is enough and we cannot just fold our arms and watch these innocent girls being abused. People here have been turning a blind eye to these child marriages for fear of victimisation and witchcraft. Some of these unions are secretly done. The husbands just pay a small token like sugar, a goat or $100.

“It does not make any sense for someone to make a missing person report a month after the incident. This alone shows that there are a lot of questions to be answered. My brother should not torment his own flesh and blood like that. They should do the noble thing of facilitating Violet’s return home,” said Elton.

Johanne Marange Apostolic Church coordinator and spokesperson, Mr Nyasha Marange, said: “Violet’s case is still to be brought to our attention. We never gathered last month as is being alleged by the Mucharwas.

“We do not condone child marriages and if, indeed, she was married off, the law should take its course.

‘‘When individuals commit offences, the church will not protect them. We have suffered a lot of bad publicity because of individuals’ misdeeds and I want to reiterate that our High Priest, Noah Taguta always speaks strongly against child marriages.

“We are a law-abiding church and we urge the police to thoroughly investigate Violet’s disappearance and bring all perpetrators to book.”

Mutare-based human rights lawyer, Mr Passmore Nyakureba said: “We continue to call upon Government to ensure that the rights of children are protected from criminals hiding behind the facade of religion. The law is very clear about the question of marrying minor children.

“It is illegal for anyone to take a minor child for a wife and for any person to marry off a minor child. I hope that we will see swift action on clamping down on this practice which is prevalent among members of some apostolic sects.

“The net needs to be cast wider than what we are seeing and reading about on the social media. The rot is really settled to the root of these culprit communities and we cannot continue turning a blind eye. This evil practice must be stopped and the time to stop it is now.”

In a statement, child protection organisation, Simukai Children Protection Programme, said: “We strongly condemn the marrying of children. Child marriage strips girls of their dignity. It is illegal, inhuman, a harmful, deathly practice and impedes the development of communities and the nation at large.

‘‘We implore communities to break the culture of silence. Child marriage cannot be a family affair; it concerns the development of our beloved country. Reporting child marriages is everyone’s responsibility.

“It is high time to push and advocate for the alignment of laws, specifically the speedy passing of the Marriages Bill which effectively bans and imposes criminal sanctions on child marriages. Let us join hands in advocating the criminalisation of child marriages.

‘‘This is the time to intensify efforts in ending child marriages. We call upon traditional and religious leaders, parents and guardians, young people, Government line ministries and civil society organisations to raise awareness on the dangers of child marriages and advocate alignment of laws.

‘Mugabe Torture Made Me Produce Nine Kids in 10 Years’ – Sikhala

MANICALAND - The death of Anna ‘‘Memory’’ Machaya (14) while giving birth at the Johanne Marange Apostolic Church’s Mafararikwa Shrine during their Passover gathering last month has opened a Pandora’s Box after another 13-year-old girl was alle...
Share via
x
More Information
x