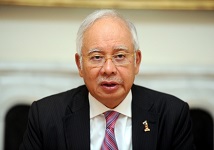 ZIMBABWE – Prime Minister Datuk Seri Najib Razak has been under pressure following WSJ’s July report that alleged the movement of almost US$700 million through entities linked to 1MDB that ended up in his personal accounts. — Reuters picKuala Lumpur, Oct 5 — Prime Minister Datuk Seri Najib Razak should be allowed “safe passage” to leave office without being charged with corruption or Malaysia may become like Zimbabwe amid a worsening economy and political instability, veteran newsman Datuk A. Kadir Jasin said.

Kadir pointed out that Malaysia could follow the Philippines’ example in allowing the late former president Ferdinand Marcos and his wife Imelda free passage to be exiled to the US in 1986.

“Do we want him to do the Mugabe by staying on at whatever cost while the economy heads towards the abyss? Or we allow him a safe passage?” Kadir wrote on his blog, referring to Zimbabwe’s president Robert Mugabe who has been in power for 35 years and previously served as prime minister.

“Let us put aside our thirst for his blood and set our focus on saving our country from ruin. The longer the current situation persists, the worst it is for us,” the veteran newsman added.

The former New Straits Times group chief editor said Mugabe had started his first term being regarded as a “hero and nation builder”, but Zimbabwe’s economy eventually collapsed under the “tyrannical” 91-year-old’s leadership and noted that Zimbabwe doesn’t even have its own currency anymore.

“If the present political and economic crises are not immediately solved, we could become like Greece or worse like Zimbabwe and Togo,” said Kadir.

The veteran journalist noted that the ringgit is plunging and confidence in the economy is sliding, saying investors are ignoring Malaysia’s strong economic fundamentals as they do not have confidence in the Najib administration.

“We have to ask ourselves, which is more important — putting him on trial for alleged corruption or saving the country?” said Kadir.

“We all know that he would do all he could to stay put. He may be putting a brave face at home and abroad but deep in his heart he knows the moment he resigns or losses (sic) control of the AG’s Chamber, the police, the MACC (Malaysian Anti-Corruption Commission) and Bank Negara, he would be arrested and charged,” he added.

Najib has been under pressure following US-based Wall Street Journal’s July report that alleged the movement of almost US$700 million (RM2.6 billion) through entities linked to debt-laden state investment firm, 1Malaysia Development Berhad (1MDB), that ended up in his personal accounts.

The MACC has said, however, that the money did not come from 1MDB but was donated donated by a Middle Eastern source.

1MDB is currently under investigation by various authorities in several countries, including Hong Kong, Switzerland, the US and the UK.

Give Najib safe passage or Malaysia may end up like Zimbabwe, ex-newsman says

ZIMBABWE - Prime Minister Datuk Seri Najib Razak has been under pressure following WSJ’s July report that alleged the movement of almost US$700 million through entities linked to 1MDB that ended up in his personal accounts. — Reuters picKuala Lumpur, O...
Share via
x
More Information
x