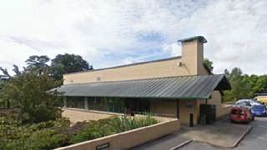 A warrant for the arrest of Bester Mashayamombe, 51, was issued when he failed to appear before Plymouth magistrates on 7 October.

The alleged attack happened at the Glenbourne unit in Plymouth, Devon.

Mr Mashayamombe, from the city, is also accused of sexual assault by touching.

The BBC has been told he has friends and relatives in Zimbabwe, and that detectives are liaising with the African country’s authorities in an attempt to find him.

The father of the alleged victim – who cannot be named – said: “The family is still hoping that he will return to Britain to face justice.”

A senior Devon and Cornwall Police source told the BBC: “Working with the Zimbabwean authorities will take some time as considerable bureaucracy is involved.

“But we have an important duty to the alleged victim, her family, and for public faith in the justice system”.

In a statement, the force said: “We are working under the belief that Mr Mashayamombe is currently in Zimbabwe.

“We will be working with other authorities to promote the warrant and arrest, and to ensure his prompt return to the UK.”

The Glenbourne Unit, part of the Derriford Hospital site, cares for up to 46 patients with serious mental health disorders.

PF: They fear therefore we are!

ZIMBABWE - Detectives trying to trace a care worker accused of raping a female patient at an NHS psychiatric unit are focusing their inquiries on Zimbabwe, BBC News has learnt.A warrant for the arrest of Bester Mashayamombe, 51, was issued when he failed t...
Share via
x
More Information
x