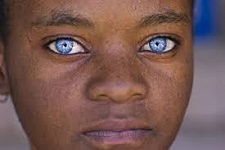 ZIMBABWE – A Glenview woman claims to have been healed from blindness after being attacked by evil spirits which saw sight being taken away from her.

Enia Ganya said she is grateful to the leader of Goodness and Mercy Ministries Prophet Tapiwa Fred who restored her sight after she simply listened to him preaching on DVD.

Speaking to H-Metro, Enias said she had mysteriously lost her sight forty eight hours before it was restored back through ‘spiritual spectacle’ miracles where one gets spiritual insight on how to deal with situations.

“I am a living testimony of what God can do, I was one person who never believed in miracles but after I had my own experience I started thinking otherwise.

“Two weeks ago, I was at home and suddenly I lost my sight mysteriously and I believe it was an evil spirit attack since there was no medical basis for it.

“I started crying and I had actually lost hope that one day I would see again.

“I was then taken to the prophet’s office with my aunt and her friend, when we got there he was not in the office and we were told to come the following day.

“The secretary then gave us a DVD which had a sermon talking about deliverance from evil spirits.

“As I was listening to what was being said I then started seeing a hand in front of me, after a while I had a voice instructing me to wash my eyes with water.

“I asked for water and I started washing my eyes, as I was washing them I started regaining my sight,” said Enia.

Meanwhile Prophet Fred personal assistant Jonathan said Enia was one of the many miracles which happen in their church.

“We always experience such kind of miracles in our church and we are so grateful with what God is doing in our midst through his prophet.

“We are also preparing for the crossover all night prayer of Thursday to Friday and we are expectant of greater miracles to take place as well,” he said.

Man has appeared in court for allegedly slapping his father over a missing stove.

Glenview women lost her sight, miraculously got back after 48 hours

ZIMBABWE - A Glenview woman claims to have been healed from blindness after being attacked by evil spirits which saw sight being taken away from her. Enia Ganya said she is grateful to the leader of Goodness and Mercy Ministries Prophet Tapiwa Fred who res...
Share via
x
More Information
x