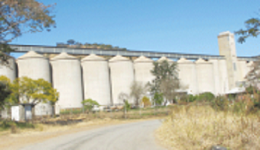 ZIMBABWE – As sacked Grain Marketing Board (GMB) employees move towards their third week whilst camped at their former employer’s offices, demanding full payment of their outstanding salaries, one can not help feel a sense of admiration for these great men and women’s brevity, and a revulsion at the callousness at which the Zimbabwe government-owned GMB is treating them.

The GMB – and by extension, the government of Zimbabwe – was diligently and loyally served by these workers for many years, and yet never bothered to pay them in full – some with salary arrears going as far back as a year.

These workers, who were served with notices of termination of employment late last year, have been clamouring for what is due to them for months, and yet have only received the raw end of the stick from the GMB management.

However, they have not let that get them down, and have been camped at their former employers’ offices for the past three weeks demanding that they be paid their outstanding salaries in full.

Despite all these efforts in forcing their former employer to ‘render to Caesar that which belongs to Caesar’, the GMB management has been found wanting, being as arrogant as ever, never bothering to address the camped workers, or even enter into any meaningful dialogue with the former workers’ representatives.

Such an attitude is not only reprehensible, but also is symptomatic of the general attitude of the government of Zimbabwe’s attitude towards the hard-working and loyal people of this country.

As a government-owned company, the nation would have expected to see the powers-that-be being more involved and compassionate about the sorry plight of these former workers, who served them without question all these years.

However, what we have witness is deafening silence on the matter, even from the highest office in the land – further giving credence to the belief that the people running this country only care for themselves.

Whilst the ruling party is busy running around organising a US$800,000 birthday bash for the President, the government can not be bothered to put the same effort in running around in raising the money to pay their own workers.

In the twisted psyche of this government, a birthday party – full of drinking, feasting, and merry-making – takes precedence over the welfare of the ordinary people of this country who are struggling to put a decent meal on the tables for their families.

Whilst the families of these workers – and by extension, the generality of the people of Zimbabwe – find themselves on the verge of starvation, homeless (as they can not afford to pay rentals), and their children out of school (as they can not afford to pay the fees), the Zimbabwe government would rather look the other way in complete contempt of the people, and instead go partying.

This has to stop forthwith.

It is now common knowledge that this government not only does not care about the people, but also regards then as fools who can just be used and discarded afterwards.

What is needed now is a plan to put an end to this callousness by this government.

What we have seen from the sacked GMB workers is an example to emulate.

They have braved all the elements as they have dug their heels in, whilst demanding what is rightfully theirs.

They have not allowed any circumstances, no matter how uncomfortable and intimidating, to dampen their spirits and resolve.

I salute these workers!

The people of Zimbabwe need the same resolve and brevity in demanding their own rights, as the government has already stolen everything from us – including our dignity – and we no longer have anything else to lose.

If anything, we only have our pride as a people left, and we have to protect that at all cost by resolutely demanding what is rightfully ours.

There is no more room for faltering, as that will be our own undoing.

The government of Zimbabwe has to stop placing their selfish and lustful ambitions above the very existence and livelihood of the ordinary people of this country.

What is more important between sending children to school and spending that money on revelry at some birthday bash?

The President is not starving, but the people of Zimbabwe are.

The President can afford to send his children to some of the best, and usually most expensive, schools in the world, but the majority of people in Zimbabwe can not even afford to pay US$50 per term fees.

The President can afford to get medical treatment at some of the best hospitals – again, usually most expensive – yet I can not even afford to get treatment for my own 69 year old mother who has cancer.

Why should a government full of educated people with PhD’s be reminded of something that is so obvious, and yet they fail to grasp that?

Has cruelty and hard-heartedness engulfed their hearts to such an extent that pleasing a mere individual with fun and funfare is more important than the lives of the majority of the people?

Is the person that the birthday bash is being held in honour of not the same person who recently declared a state of national disaster due to a debilitating drought in Zimbabwe?

Does that not at least show that somewhere in those corridors of power and privilege there is some knowledge that the people of Zimbabwe are starving!

So why proceed to recklessly splash US$800,000 on a lavish birthday bash?

In a home where the family is starving, and the father proceeds to spend their meagre resources on revelry, I am sure that the wife would file for divorce the very next day.

It is about time that Zimbabweans filed for divorce against this ZANU PF government!

The people have had enough, and can not take it any more.

We need a government that truly cares for us, and the example set by the sacked GMB workers is an inspiration to us all, as this government will never give us what is rightfully ours on a silver platter – which is what a democratic government is supposed to do – but we now have to wring it out of them.

ZIMBABWE - As sacked Grain Marketing Board (GMB) employees move towards their third week whilst camped at their former employer’s offices, demanding full payment of their outstanding salaries, one can not help feel a sense of admiration for these great m...
Share via
x
More Information
x