Going against the grain: Mugabe, Zuma praise Nehru and Congress at the India … 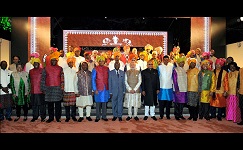 ZIMBABWE – Remember the vibrant photo from the ‘Indian mela’ (carnival) for the third India-Africa Forum Summit (IAFS) when all the visiting dignitaries  wore specially made Indian tradition clothes?

Remember how two leaders stood out for not wearing the colourful kurta-safa? Both Zimbabwe President Robert Gabriel Mugabe and South Africa President Jacob G Zuma did not opt for the traditional attire. While Mugabe wore a sober grey suit with a tie, Zuma favoured an ‘achkan'(a knee-length coat buttoned in front).

However, as the IAFS continued, it turns out that their attire is not the only thing that made Zuma and Mugabe stand out. Both African leaders praised the contribution of India’s first Prime Minister Jawaharlal Nehru and the Congress party he led. In fact, Zuma even broke protocol and called on Congress president Sonia Gandhi in Delhi, according to a report by The Times of India

Incidentally, the Congress had boycotted Prime Minister Narendra Modi’s dinner for the visiting African leaders, on account of the perceived snubbing of Jawaharlal Nehru’s contributions to India-Africa relations.

“We would like to recall the historical ties that bind us over the last century, emphasising particularly the role of two of your visionary prime ministers, Jawaharlal Nehru and his daughter, Indira Gandhi,” said Zuma as he addressed the summit, attended by 54 African countries.

“Indira Gandhi, in her first 11 years in office from 1966 to 1977, changed India’s African policy through the introduction of the Africa-India Development Cooperation and India’s support for liberation struggles in Africa, including South Africa. The actions of these two Indian visionaries have created the base of strong solidarity between African member states and the Republic of India,” he said.

In his address, Mugabe said Mahatma Gandhi and Nehru led the way through non-violence and showed the path to rid India and Africa of colonialism. The 91-year-old Mugabe also termed the Indian National Congress as a “great party” as he recalled Africa’s ties to Gandhi and the Congress.

Meanwhile, Zuma visited Sonia Gandhi at her residence to discuss issues of bilateral and global importance on Thursday. The discussion lasted for about 90 minutes and former prime ministe Manmohan Singh was also present says The Times of India report.

Incidentally, Mugabe seemed to be having an eventful day at the summit. At a photo op with Prime Minister Narendra Modi, the 91-year old stumbled on his way to the dias. Modi immediately extended his hand to Zimbabwe’s President as help his balance and tumbled. The two then greeted each other and Modi helped Mugabe step off the podium.

Although this tumble wasn’t as viral, or as dangerous, as the #MugabeFalls memes earlier this year, it’s worth a watch.

Going against the grain: Mugabe, Zuma praise Nehru and Congress at the India …

ZIMBABWE - Remember the vibrant photo from the 'Indian mela' (carnival) for the third India-Africa Forum Summit (IAFS) when all the visiting dignitaries  wore specially made Indian tradition clothes? Remember how two leaders stood out for not wearing ...
Share via
x
More Information