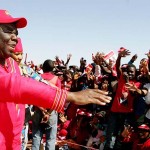 ZIMBABWE – Flashback: Voters cast their ballots during the 2013 harmonised elections (above). Reforms or no reforms, Tsvangirai or no Tsvangirai, elections will still be held in 2018 and produce credible results

Over the past few weeks, Zimbabwe’s political landscape was inundated with funny acronyms that were presented as manifestos and blueprints by various opposition parties.

It began with the People First with their BUILD (Blueprint to Unlock Investment and Leverage for Development) and PEACE (Presidential Economic Advisory Centre for Excellency).

Enough was said about this document.

MDC-T, as usual, sensationally claimed that BUILD was plagiarised from their discredited JUICE.

Without discounting their claim, MDC-T must remember that JUICE and BUILD were cooked from the same pot by the same cook. Therefore, they are bound to be analogous.

Whatever the circumstances surrounding the origin of BUILD, the fact remains that the document is anti-Zimbabwean.

Not to be outdone was Tendai Biti and his newly-formed People’s Democratic Party (PDP).

The name of the party was not without controversy, as Ruyedzo Mtizwa immediately sprung up from obscurity to claim ownership of the name.

He claimed they launched a party with the same name way back in 2008 and immediately went into hibernation.

We await to see how the drama will unfold.

Biti launched his ARREST (Agenda for the Restoration and Rehabilitation of Electoral Sustainability) and HOPE (Holistic Programme for Economic Transformation). Biti’s ARREST acronym appears to be informed by the unfinished agenda he has been nurturing against Elton Mangoma, Welshman Ncube and Morgan Tsvangirai, among others, in the same manner that people sometimes name their dogs after their adversaries. Should he ascend to power, and God forbid, rest assured that he shall incarcerate people.

Mangoma will soon launch his acronym, and so will Egypt Dzinemunhenzva, Dumiso Dabengwa, Kisnot Mukwazhi, Welshman Ncube and many other players who traditionally surface during election period begging for alms from gullible donors.

The most nonsensical of all was the MDC-T’s WReNE (Without Reforms No Elections). Elections are a democratic process that must take place in a democratic society such as Zimbabwe. Tsvangirai and his party must not behave as if they have the say-so to proclaim or stop elections.

Reforms or no reforms, Tsvangirai or no Tsvangirai, elections will still be held and produce credible results.

Since Tsvangirai went into boycott mode, the country has held several by-elections successfully. Likewise, the forthcoming 2018 harmonised elections will be held without the MDC-T if they choose to boycott and disenfranchise their supporters.

In what capacity does Tsvangirai tell over 13 million Zimbabweans who belong to over 20 political parties that there will be no elections without the so-called reforms?

That egotistical statement is a manifestation of Tsvangirai’s inflated idea of his importance. He was misled into believing that he is the sole face of opposition politics in Zimbabwe.

It is because of this conceited arrogance and swollen-headedness that the much talked about grand coalition with Tsvangirai will never see the light of day.

While launching his document, Tsvangirai attributed the perceived national crisis to the issue of legitimacy of the 2013 election results. It is a common problem with most African opposition parties. Legitimate election results are only those in favour of the opposition. That mentality defeats the purpose of elections because there are two possibilities at the end. One must enter elections ready to accept any results.

“Our demand for reform is also a SADC demand that was never complied with,” claimed Tsvangirai.

The SADC that Tsvangirai is referring to endorsed the 2013 elections as free and credible.

The fact that the regional bloc omitted the term “fair” in their endorsement is inconsequential. It is a matter of semantics and the omission does not in any way amount to illegitimacy.

Credibility and fairness go hand in hand. Unfair elections can never be free and credible. It is a misnomer. Something that is credible, according to the dictionary, is authentic, plausible, believable, convincing, trustworthy, reliable and realistic. Those adjectives aptly describe the 2013 harmonised elec- tions.

If the reforms that Tsvangirai always sings about were that central, SADC would not have come to observe the elections, worse still positively endorse them.

It was not only SADC that endorsed the 2013 elections as the African Caribbean countries, Common Market for Eastern and Southern Africa, Non- Aligned Movement and many other progressive countries across the globe accepted the poll results.

At the meeting in Addis Ababa soon after the elections, the AU Peace and Security Council congratulated Zimbabwe for holding elections in a manner that conformed to the AU principles as enshrined in the African Charter on Democracy, Elections and Governance. It went to the extent of calling for the removal of sanctions on Zimbabwe. That call came from a continental bloc that had accepted the electoral results of Zimbabwe as defined by Africans, not Americans or Europeans.

The crisis of legitimacy that Tsvangirai wants to sell to everybody is too expensive and hard to stomach. Over 60 percent of the electorate that voted for President Mugabe and Zanu-PF granted legitimacy to same.

Therefore, it is within Tsvangirai’s democratic rights to shun the 2018, but to open his foul mouth and say “No Reform, No Elections” is the height of folly.

Going beyond the acronyms

ZIMBABWE - Flashback: Voters cast their ballots during the 2013 harmonised elections (above). Reforms or no reforms, Tsvangirai or no Tsvangirai, elections will still be held in 2018 and produce credible results Over the past few weeks, Zimbabwe’s politi...
Share via
x
More Information
x