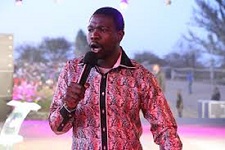 ZIMBABWE – South African gospel artist Benjamin Dube along with Pastor Charles Charamba stamped authority in the word of God during their performance at the Night of turnaround prayer meeting held at PHD ministries base on Friday.

Pastor Charamba performed soon after the opening prayer and began with worshipping songs like Ndinokumbira Moyo wangu, Buruka and left the multitudes of people in tears as they continue praying.

Olivia Charamba singing one of her old songs ‘Rute’ she forced people mostly women to leave their seats and thronged near the stage to stage manage the dramatic biblical story of what Ruth went through with her mother in-law.

Prophet Magaya shared his sermon quoting bible scriptures from Ruth 1:6 and 1 Samuel 1:17 before Benjamin Dube performed leading the people to praise God as they sang along some of his old songs.

A number of people testified receiving their healings and the prayer meeting went up to Saturday around 6am.

Among the artists who performed were Shinso, Oliver Mtukudzi and Nicholas Zacharia who entertained the crowd that had arrived much earlier for the Night of Turnaround prayer.

“First of all I want to thank God as well as Prophet Magaya with the opportunity he gave to Mtukudzi to perform at a church gathering,” said Mataure.

“Prophet Magaya has allowed many people who fail to attend Oliver Mtukudzi shows to watch him live on stage and of course all his songs is saturated with messages of our social life,” he added.

Mtukudzi sampled his old Christian songs like Hear Me Lord, Hozana and Patapata.