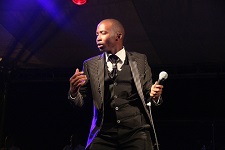 ZIMBABWE – Gospel musician Mathias Mhere has taken a dig at two faced people who only go to church in times of trouble.

Speaking to H-Metro at Munya Viali, Vialy’s studio where the album is being recorded, Mhere said some people only seek the services of the church when they are in trouble and seeking financial gain.

“Some people only seek God in church when they are in trouble. Some only go for miracles and when they get delivered from their troubles they then leave the church. Seeing them, they will be pretending to be true Christians but they will after something. Kutsvaga mari mu church, zvaita vobva vatiza, makorokoza chaiwo,” he said.

As has been the norm, Mhere changes producers in his new projects and this time he is working with Viya.

Some of the tracks on the forthcoming album are Judas, Nguva yaNoah, Be Still and Mugomo and he said the project will be out in February next year.

“I decided to take my time, doing the necessary preparations. Some of the tracks are done now,” he said.

“Working with Viya is an experience and as a way of adding creativity,” he said.

The Favour singer and the producer have also experimented on the traditional beat. On his previous album, Mhere ventured into Kanindo.

“I love trying new things and with my producer, I have confidence that it will come out well,” he said.

This singer has continued releasing single such as Mukombe Wechizoro and Wenyasha Ungamudii which he did with dancehall star Killer T.

Mugabe ‘relative’ gets 35 months for fraud

ZIMBABWE - Gospel musician Mathias Mhere has taken a dig at two faced people who only go to church in times of trouble. Mhere slammed hypocrisy in a new song Makorokoza Muchurch off his unreleased fourth studio album currently being recorded. Speaking to H...
Share via
x
More Information
x