ZIMBABWE – Government has revised travellers’ rebate to $200 from $300, among a cocktail of measures as it seeks  to maximise revenue collection from imports and address the continued abuse of the facility by local businesses.

The daily import duty remission was also reduced from $50 to $30 per individual traveller per day.

Under the new regulations, all travellers using small cross border transport (mostly open trucks) or buses with huge trailers and carrying goods of a commercial nature no longer qualify for the rebate.

The goods are now treated as commercial.

According to Statutory Instrument (SI) number 148 of 2015 (Customs and Excise (General) (Amendment) Regulations, 2015 (No 80) issued recently by the Ministry of Finance and Economic Development, travellers’ rebate will only be granted to pedestrians and travellers using private vehicles.

Prior to the new development, individual travellers would enjoy the rebate whether they used commercial transport, buses or small cross border transport operators.

Provisions of the Customs and Excise Act allow a traveller to import goods of a prescribed amount on their first entry into the country which is known as a travellers’ rebate.

In the event that the goods exceed the set amount, the individual pays import duty on the excess.

The Statutory Instrument also states that third party transporters carrying goods of a commercial nature will have to be cleared into the country by Zimra under the commercial category.

“It is hereby notified that the Minister of Finance and Economic Development has in terms of section 235 of the customs and excise act (Chapter 23:03) made the following regulations:

“1. The regulations may be cited as customs and excise (General) (Amendment) Regulations, 2015 (no 80)
“2. (1) the customs (General) Regulations, 2001, published in Statutory Instrument 154 of 2001 (hereinafter is called “the principal regulations”), are amended by insertion after part IV,” read part of the SI.

The new law also states that a traveller importing goods in a transport service vehicle , which vehicle is drawing a trailer and is used for conveyance of goods through a port of entry shall pay full duty.

However, the SI has adversely affected those travellers (inclusive of returning residents) importing goods from South Africa through Beitbridge border post as those stranded are accusing Zimra, which is the implementing agent, of failing to notify the public (travellers) on the latest development.

For the last three days, travellers have been sceptical of importing goods using buses or small cross border transport operators for fear of being stranded at the border in the event they fail to raise money for duty.

Cross border transport operators have criticised the new regulations saying this was meant to elbow them out of business.

“You can see that there are very few vehicles in the border. As small cross border operators, we feel these regulations are meant to push us out of business because few travellers would want our services or manage to raise the money for duty especially that rebate has been scrapped,” said one operator who preferred anonymity.

However, the Zimbabwe Revenue Authority (Zimra) officials at Beitbridge border post recently told the parliamentary thematic committee on Peace and Security on a visit to the area that there was rampant smuggling of controlled goods and the abuse of travellers’ rebate. 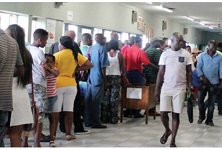 ZIMBABWE - Government has revised travellers’ rebate to $200 from $300, among a cocktail of measures as it seeks  to maximise revenue collection from imports and address the continued abuse of the facility by local businesses. The daily import duty remi...
Share via
x
More Information
x