ZIMBABWE – Government yesterday vowed to restore order in Chitungwiza, describing it as one of the worst run local authorities.

Local Government, Public Works and National Housing Minister, Saviour Kasukuwere, said this after Chitungwiza workers, through their representatives, voiced their concern over its alleged failure to rein in on town clerk Mr George Makunde.

However, Minister Kasukuwere advised the workers that Government was aware of developments in Chitungwiza and would soon act.

Said Minister Kasukuwere: “What you see in Chitungwiza is a cause for serious concern. We will not fold our arms, certainly we have to intervene to understand the issues at Chitungwiza local authority,” he said. “It is a multi-faceted challenge that we are looking at, environmental challenges like land settling, the land barons on the Matiza Inquiry into Chitungwiza. How land set aside for social aspects and institutions like schools, crèches, soccer and so forth was parcelled out.”

In 2014, Government instituted a commission of enquiry led by consultant, Joel Biggie Matiza, to probe the land situation in the town and has since released its findings.

“Chitungwiza has not been well served by the calibre of councillors we have. I grew up in Chitungwiza and most of the places that we used to play soccer are now built up in wetlands — just across from council offices in Zengeza 4 — there were always some clear demarcations,” said Minister Kasukuwere.

On the issue of illegal land dealings, Minister Kasukuwere said Government was going to work flat out to bring the culprits to book.
“We are going to deepen our claws on those who have taken upon themselves to allocate land when they do not have the authority to do so.

“We are satisfied with the role the courts have played in putting to an end this menace and also making sure that all those who are responsible for it are dealt with. You have the councillors working in cahoots with some of the workers to illegally parcel land out.”

Minister Kasukuwere said the town was failing to provide essential services to the people.

“At the end of the day we do not have enough water for residents and the ratepayers are not also responding kind to meet their obligations because of lack of service delivery.

“How can they pay for water which is not being delivered, it is a multi-faceted challenge we need to address comprehensively,” said Minister Kasukuwere.

The huge workforce, he said, was also fuelling poor performance.

He said thousands of workers were hired by the previous council on political grounds.

“Every councillor would just bring in his people, we cannot do that, we have to restore dignity in local authorities,” he said.

On salaries and exit packages for the fired workers, Minister Kasukuwere said Government was going to intervene in order for council to pay what was owed to workers.

Minister Kasukuwere said there had been no town house development ever since the tenure of former town clerk, Forbes Magadu, who developed Chitungwiza Town Council.

Chitungwiza mayor, Phillip Mutoti, admitted that they had failed the residents.

“It is true that we failed as a local authority after we inherited problems from the previous management.

“Another issue is that we have the greatest number of land barons, which is our biggest challenge that needs to be addressed as a matter of urgency,” he said. 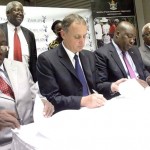