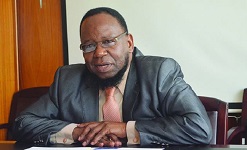 ZIMBABWE – Government will soon come up with maximum schools enrolment limit after it emerged that some educational institutions surpass 3000 pupils.

This has in turn affected learning as it increases the teacher-student ratio to unacceptable levels.

Primary and Secondary Education Minister, Dr Lazarus Dokora, made the remarks as he addressed school heads, provincial and district officials during a curriculum review meeting in Harare on Monday.

Dr Dokora said historically, there was an education policy that barred schools from setting maximum numbers for enrolment; which was a measure that had been adopted to curb racial discrimination.

He said, however, time had come to adopt new measures for enrolment.

“Now in the years 2014 to 2015, we are now saying we want to produce a draft document to say we now have a maximum school size otherwise I could never be able to say we have a need for the construction of 2056 schools because the schools continued enrolling and never reached a full capacity.

“We do not want to have a situation whereby one school will end up having three to four streams. I know in Luveve (Luveve School), Bulawayo we have 3 500 pupils and we get a teacher there trying to teach 97 pupils, just to say ‘take out your mathematics textbooks and put on your desk’ just to say that, the time it takes for every kid to have that ready is too long. Surely, teachers cannot continue like that,” he said.

The congestion of schools has been resulting in lack of adequate resources for learning like textbooks and lack of requisite training and attention as the teacher will be overwhelmed by a lot of work therefore leading to poor performance of the students.

Primary and Secondary Education Ministry’s public relations officer, Mr Patrick Zumbo, was recently quoted by The Herald saying the student-to-teacher ratios were 1:25 at infant level while at junior level a class should hold at least 40 pupils.

Mr Zumbo said, at secondary level, schools were required to have a capacity of 35 students per class.

Government is in the process of engaging in joint ventures with local and foreign investors in the construction of the 2 056 schools required countrywide.

Reports are that construction of some of the school are now at an advanced stage.

5 arrested for poisoning 11 elephants in Zimbabwe

ZIMBABWE - Government will soon come up with maximum schools enrolment limit after it emerged that some educational institutions surpass 3000 pupils. This has in turn affected learning as it increases the teacher-student ratio to unacceptable levels. Prima...
Share via
x
More Information
x